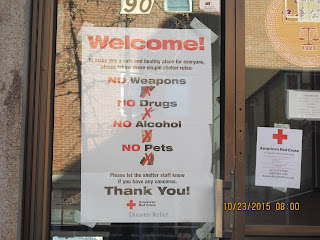 Today was the last day that the people displaced by the Fire could stay at the CCBA.
"They have to be proactive about getting an apartment and getting their life back together." said Ellen Sullivan, a volunteer from the red cross. To give an idea of how much time this woman from Somerville put in, she worked 6am-7pm the first day, 6am to 1am the 2nd day, slept two hours, and then came back 6am today.
"I love it." she said. Did I mention she is a volunteer?

"One of the women who was displaced is actually pregnant and she just found out yesterday, so one of the Elders" (at first I didn't know what she was talking about, but this is a title in the Church of Latter Day Saints, they were out in pretty good force too.) "had twins and so he brought a bunch of toys and some people from the city did and we're having a baby shower!"

I thought that was a cool little story in the middle of all of this. I asked what her impressions of the Chinatown Community groups were.
"Oh everyone has been fabulous, the people from the building, Hung Goon" He's the CCBA President, "The people from the City." Courtney Ho from Chinatown Mainstreet passed by and said hi as we talked, "She's been wonderful." Ellen went on, "Everyone has been such a help, the Elders" again the Church of latter day Saints.

I ended up translating for a couple of people while I was there.

"I don't English." the woman had said laughing nervously.

"I know I speak Cantonese. If Mandarin is your language I can't really help you but Cantonese I can translate." I told her. She started cracking up.

"Oh I thought you were one of, you know like these people, you know you look very Ngoi gok yun, a foreigner."

"Yeah I know." I said.
Actually the woman ended up having nothing much to say. But the encounter was funny to me.

It was good to see laughter right?

Anyway, as you will learn more through this blog, Chinatown can be a very factional community. But it's nice to see everyone banding together like that when stuff goes down.

I was also impressed that the Latter Day Saints (those are Mormons) came out in such force. I mean we have a ton of Churches in Chinatown too. If Saint James called me up would I have showed up for some volunteer thing? Yeah probably. I'd rather do that then go to Mass frankly.

Plus it's a really good thing we have the CCBA. I mean where would they have gone? Last time there was a diplacement the people went from CCBA, to Josiah Quincy School, back to the CCBA.