Chinatown isn't going anywhere (A perspective from the North End)

Posted by Kung Fu Dad on October 27, 2015
Today I interviewed Joe DiGangi from Urban Core Development just to get his perspective about what is happening in Chinatown, from the point of view of a developer. He did some work in Lower Roxbury, South End, Dudley, Fort Hill, not Chinatown. But still don't you want to know how a developer sees your community. 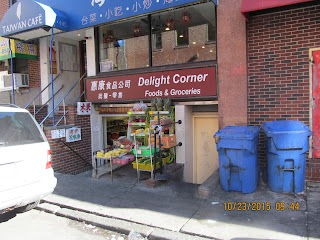 (A new neighborhood market in Chinatown. While many places are closing down. New businesses are also opening up)


Right away he opened my eyes to the fact that Chinatown is the last untapped part of the city that hasn't been developed. North End, South End, Seaport... and then on the perimeter there has been some stuff with Avalon, Archstone and then there is One Greenway but the buildings in the core center are pretty much the same.

I had interviewed a Vietnamese-Chinese entrepreneur (some might say "street entrepreneur" in the past) who had strong ties to Canal Street in New York. (He didn't want his real name used. So let's call him Duong, he'd probably get behind a name like that.)

"Yo man, for what I see all of Boston is build up, like beautiful bot only Boston Chinatown look like a piece of shit. Look at that building like right there. Imagine twenty years ago they make it beautiful. Not like sell it but make it like Chinese way. Yeah! man. In New York you see that shit, but here no."

I told Duong that a lot of the stuff he said lined up with what the developers had said, and today I got the more professional read on the situation. Duong said that in New York Chinese developers would change things to make Chinatown stronger, to make it last for 100 years. But he thought that Boston's Chinatown would be gone in 20.

Chinatown won't disappear. It will just be more Commercialized.

"Look, Chinatown's not going anywhere." reassured Joe DiGangi, "It will just be more watered down and commercialized. The North End is a perfect example of a neighborhood that has changed without losing that ethnic feel."

Joe then gave me a quick history lesson from his experience in the North End and in this business.

"In the 1980's Boston was not a Cosmopolitan city. There was Back Bay and Beacon Hill but everything else was ethnic neighborhoods. The North End was Italian, Southie was Irish, the South End was black and people didn't go into other neighborhoods. I didn't step foot in Southie until Senior Skip day in high school because one of my friends happened to be from South Boston. But otherwise why would I go there? But then in the mid 90's something happened. The North End became somewhere to be.Yuppies started moving in and Old Timers started to sell. And it lost a lot of that authentic Italian feel to it. It became more watered down and Commercialized."

I mentioned that the businessman I interviewed, who I called Fred, said much of the same stuff regarding the August Moon Festival.

"Look I grew up in the North End, I mean even when I wasn't living there I was still part of the neighborhood. And there was a street of four or five butcher shops where you would see dead rabbits on a hook showing the kill of the day. But for instance, my father was the first one to build Condos in 1975. Before that there were no Condos in the North End, the didn't know what they were. But a Condo, you take a piece of that land, and anyone can buy it, from anywhere, even if their not Italian. So in terms of the North End being an "all Italian neighborhood" no it's not anymore. But will it disappear? I just don't see that happening. It's just changed."

"I mean people like going to Chinatown. That feeling of being densely populated, alleyways where you can go down this little street and you see something new and you go in the supermarket and maybe it's not really something from China and maybe it will be less authentic or watered down but it's not going to disappear. I mean people who come to America from Europe, they think of East Coast like New York, then Texas, the cowboy, and then L.A. "

"And Boston, along with New York and Philly is one of the few places where you can get that feeling of what East Coast America is supposed to be like. I mean have you been to Sand Diego's Little Italy? It's like a Disney world version. You can't just create an ethnic neighborhood." he laughed

I got the sense of how important neighborhoods like Chinatown and the North End are.

"Go to Arizona or New Mexico. You won't get that feeling at all. Just open space as far as the eye can see."

So even if it's just for tourism alone, these neighborhood like Chinatown and Little Italy probably won't be completely swallowed up. They will just change.

Are the Changes Good or bad?

"Well if you want to romanticize it I guess you would say it's bad. But to be honest, it was a little run down. And now it's a nicer neighborhood as far as wealth goes. And a lot of the changes, well this is what you see in American in general. You don't see the small businesses and Mom and Pop stores you used to see."

Joe's eyes glazed over a bit as he was walking down streets that might still be in the North End, but the scenes and buildings he would describe exist only in his and other people's memories now.

He laughed saying, "I mean I walked down the street and there was the toy shop, the candy store and one store Tosie's" he gestured now looking at the store in his minds eye and stepping into it, "I mean," he laughed, "On one side of the store you had musical instruments. Every musical instrument you could possibly imagine. And then other the other side was all guns and knives. There's no way you could have that kind of store in the modern economy."

"I mean not all change is bad. Look at the Seaport District. that used to be just parking lots. It's just a matter of perspective. You only see it as bad if you want to hold on to the past."

"Here's a good story," he said changing position and tone, "Do whatever you want with this."

"In the late 70's a young black couple came to my Father's Real Estate Agency" This is in the North End, "And he told them, 'I will show you anywhere you want and all the apartments that meet your criteria, but I'm not sure you will be well received. The couple asked what he meant. He told them, "I support you being here. You have aright to be here and I think you should be here. But I don't think the neighborhood will not (support you)'"

"And they looked at a few apartments but in the end they didn't move in because people would be throwing their stuff out on the street. That wouldn't happen today. That just doesn't happen anymore and for good reason. So how can you say that change is bad?"