Posted by Kung Fu Dad on October 13, 2015
This morning there was a Clean Up Chinatown Meeting
held at 87 Tyler Street at the
Asian American Civic Association.

Is Chinatown dirty? Yes I suppose it is and I noticed this more today as I biked back from this meeting into the South End and JP. Mary Chin, who heads the Committee, wrote out the Agenda and when the representatives from the City and Tufts didn't show after 20 minutes, the meeting began. I was NOT the only white guy there. In fact there was a real white guy, a Harvard Medical student, who speaks Mandarin and reads and writes it to. (more shame to me. Something I need to improve in myself)

Also at the table was Amy Guen.
"Are you Uncle Frank's sister?" I had asked quietly as she left at the end of the meeting.
"Yes. I'm the Oldest!"
While we were waiting for the meeting to start she shared some golden Chinatown history. You can be sure that an interview with these stories will be featured on the blog soon.

But back to Cleaning Up Chinatown 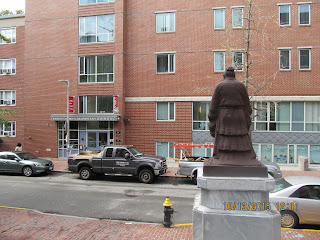 These barrels fill up fairly quickly. So even if people want to put trash away the right way, they sort of can't.

What's this? This a city wide initiative for the City to go door to door to talk to businesses to "educate" them.

It was suggested in a previous meeting that two  mah jong parlors, in particular should be talked to. Since I was thinking of joining one of those family organizations maybe I can duck my head in there at some point.

Some signs were made in Chinese to be put up on private property regarding littering and public urination.

I will just say that at some point in this conversation I started increasing in volume and my hand gestures became rather large and expressive. I guess I should just shut my mouth and take notes.

I will say on this blog that I have seen plenty of drunk white people peeing all over the place, not on trees and plants where they actually provide nitrogen for plants, but by Josiah Quincy School. I raised my hand and suggested Humanure Compost  Toilets. Apparently, the Greenway had considered this. (Ling-Mei of the Sampan volunteered this information. Ling -Mei is awesome, she knows everything.) Except the toilets were some sort of Carbon toilets that would neutralize the smell and water the plants.

My son has also peed in Chinatown in the bushes, and in JP. So do dogs.

The worst type of urination for me is on concrete, or in the elevators of the subway. I have also some people pooing on the street in Chinatown. Those guys are straight up crazy though. Humanure Compost toilets are something to think about. Questions about the spread of disease?

But Cameras are actually good. They will help with catching murderers and rapists. They are also expensive.
They were suggested for the purpose of catching litterers and peeing and perhaps fining or shaming them.
I may have been outspoken and wildly gesturing here as well.  So much for being a quiet impartial reporter type.

I didn't quite catch what this was about but here I actually contributed something of use.

My idea was and is volunteer street sweepers. A group that would be a cross that what happens on Boston Shines and the Chinatown Crime Watch. But I have to talk to some people about helping me set this up.

A survey was given out at the end. That will be my next post. Hopefully people can fill out  the survey on this blog and also sign up for my street sweeping crew.