Posted by Kung Fu Dad on October 26, 2015
Halloween is approaching, and Chinatown has some legitimate ghost stories. Fred (not his real name) shared some of his stories with me in an earlier post. Today let's focus on the spooky ones.

"You know that building was all boarded up when I was a kid. It was so Ugly that we didn't even want to look at it. If we were going from Tai Tung back to the restaurant we would actually run, full speed just so we wouldn't have to look at it. It was that much of an eyesore."

Later that building would house Kwong Kow Chinese School and now it is actually a community Center. The school where I learned Kung Fu is there along with several other martial arts, dance and music schools, an after school, a #library, a gallery, and most recently it is where the displaced people from the fire were staying.

"I think the City actually sold it to the Chinatown Community for like a dollar or a penny or something. But you know Kwong Kow wasn't in that building in the beginning, it was in the building where Sun Sun is now. And that place was haunted."

This was interesting to me because as Kwong Kow moved from building to building I happened to be somehow involved either as a student, teacher, or Kung Fu Sifu. But I would always hear kids talking about the place being haunted. So this is the origin story of all that.

"That old Kwong Kow had a funeral home on the bottom floor." See of course a ghost story would come out of that. Having a funeral home and a school in the same building doesn't seem like good Feng Shui to me. "And in the late 1800's most of the Chinese here wouldn't be buried here. They would send their bodies back to China. And back then that Funeral home was there in that building. But the thing is, it's not like they would send the bodies back right away. They would be stored there for a while before being shipped back on that long boat ride back to China."

Now that's creepy. But not the creepiest.

"You know that On Leong Building?" 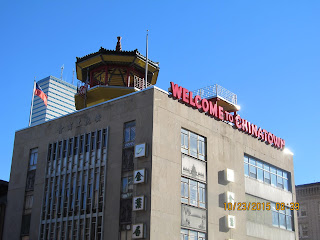 "Nobody ever wants to use the bathroom there because they say that place is haunted too. And it is weird. Many people have been taking a leak down there and suddenly they feel chills. I've felt it myself. And then sometimes you get that feeling that someone is looking at you, but then you turn and nobody's there."

I had gone there to sing karaoke there a couple times and I did turn like that several times thinking someone was there. Of course, I had been drinking. But I did have that sensation as well.

"They told me that back in the old days, the gangster days, that rivals or anyone that needed to be taken care of, were brought down to the basement and... executed.

Not only is that a ghost story but it's got recent legitimacy. I mean can you beat that for a haunted house? Maybe we should have tours on Halloween.