Posted by Kung Fu Dad on October 21, 2015
Today I started my first Wednesday Sweeping. I'm working with Main Street, Tai Tung Village, and the AACA to start this clean up Chinatown street sweeping. Tai Tung Village actualy said they want to recruit their residents to come out and do this with me. And they are providing me with the barrels and the dump sight to clean up. I was going to start small. I honestly thought I could just sweep around the block in about 20 minutes. And I knew for sure I wasn't going to do more than an hour.
I did a little over an hour and all I got done was the Tai Tung playground and some of the back street.

Starting off the first 5 minutes it was pleasant and I was in a good mood. I thought perhaps it would be better if there were a composting bin nearby so that I could put the leaves in there, even the litter. Maybe I would sort through sand pull some of the recyclables out. Oh this homeless person left their blankets here? Gee what should I do about that? 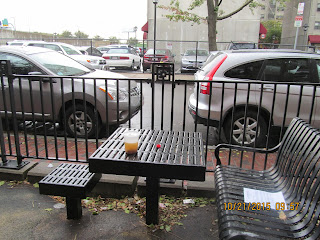 Maybe I'll put some trash in this plastic container and try to sell it on Ebay. Lol 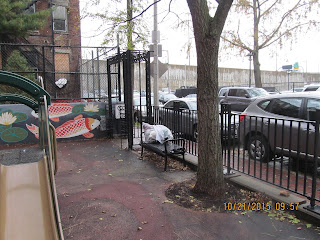 Perhaps I should just move this homeless persons stuff to the side. Wouldn't want to condemn them to a death by freezing.

But My mood quickly changed after sweeping up this shit. 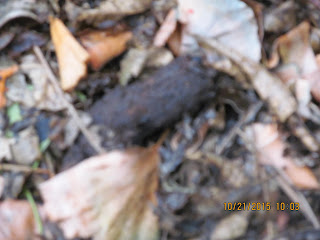 Literally. And It's not a dog's. 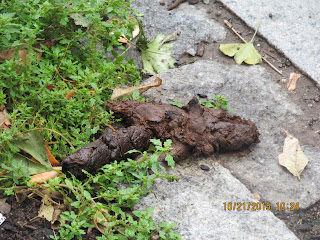 Oh and look at this, here's some more. This is all by the playground by the way. I trashed the blankets and picked up all the glass and cigarettes. Yes I threw some leaves in too my eco-friendly friends. Yes we need a compost barrel because that would be easier. But at this point if some guy came back to challenge me over the blankets I was ready to poke him in the throat with the broom stick end. I really needed to wear gloves. But I didn't even ask about composting bins becomes next comes this. 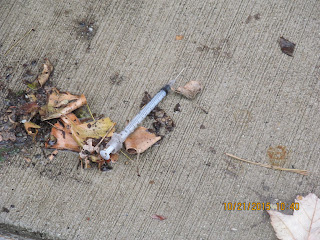 More where that came from too. 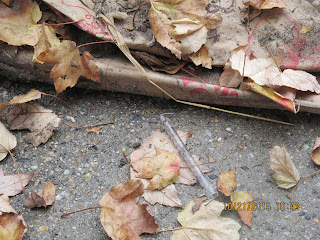 My kids have played here. And One Greenway is down the street and not yet finished in terms of a swath of area yet to be landscaped. That means they oculd have dumped their fecal matter and their needles over there. Well I can tell you one thing. I'm pissed now. This brings back childhood memories and yeah I alreday knew... but still. It was humbling to sweep up the shit and I didn't really make a dent. Of course I could use some people's help. But I also think the compost idea would be helpful As for the needles, I did just throw them in the trash. The way that the dumpster is emptied is by machine so I that means they won't get pricked. But there's probably a better way to dispose of the needles.

In other words I know more about what we need now. I'm wearing gloves next week.

Update*
So Apparently to dispose the needles I'm supposed to contact Citizen's direct. by phone it would be by calling 311. There is an App to but I don't have a fancy phone. But definitely good to know for next week.