Send in the Cavalry

Posted by Kung Fu Dad on October 28, 2015
I started Street Sweeping earlier than usual today because my Kung Fu class had been cancelled. I had seen a homeless guy sleeping in the park. When I got there he was gone but his stuff was there. I moved it to the dumpster. He came back to get it as I was bringing something else there. I tried to talk to him, to let him know I'd be cleaning on Wednesday etc. The truth is I should interview him. He was Asian. But he seemed not to understand Cantonese. You could argue I was being a jerk. But hey, it was already 10am and that playground is supposed to be used by kids. I mean there are a lot of day cares that would like to use it.

Anyway. I went the other direction avoiding that back alley (which pretty soon will be cleaned up because of development.) At 10:45, I was joined by other people who live in Tai Tung!
"Do we have to do the other side of the street too?"
"Let's just do this side first." I responded. It's funny. Every time I work with the people who taught me when I was a kid, seem to be on the same page as me. In a lot of ways we think the same way.But if you looked at me and looked at them, you would not guess that. 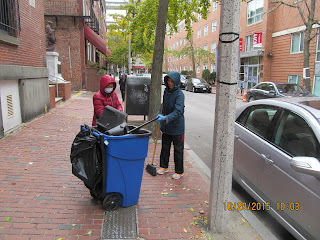 Tong How Jerng was there and other people who used to work at Kwong Kow and probably cleaned up after me when I was my kids age.  Tong How Jerng taught me some tricks of how we should be holding the bag etc. And how I should have taken a picture with the bags full of trash. "That's your evidence." 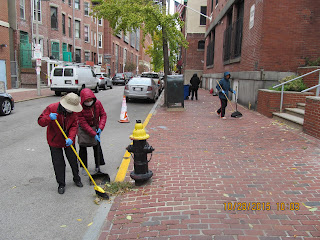 We did most of the block, except the back alley, which, glancing down it, looks fairly clean. It's just that I know there are a ton of heroin needles back there. Tong How Jerng found one sweeping actually. On Facebook I was told to call 311 or Citizens Direct etc. But talking to Main Street they said that they just want you to take the syringe and stick it in a bottle and then cover the bottle and throw it out, to get it off the street. That's what I did. It took a while to find a bottle because we had cleaned most of the street already.
No poop this time. And we also had gloves. Plus we were a team. After about and hour for them and about one hour and 45 minutes for me since I started early, we were done.
"Sau Gong" Tong How jerng said, "See you next week."