311 and the politics of trash.

Posted by Kung Fu Dad on November 12, 2015
You would be amazed at how complicated it can be to talk about Trash. Especially in a tight community like Chinatown. For instance, at the last meeting I went to specific businesses and names were brought up, names that I recognized. And I've decided in terms of that "educating" or "warning" or "ticketing"... well I'm staying way the hell out of that. 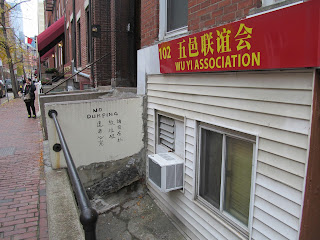 (Let's take a look at this sign. It says a lot. especially since it is a hand made sign. What is dumping? What I gather is that dumping is other people putting their trash on your property for you to take care of it. Hence the sign. Honestly, I have never had to personally think about what I was going to do with my trash, other than to take it to the curb or to the dumpster. And didn't really start thinking about trash until I started composting and sweeping the street in Chinatown.)

But here is something you might not have known about the problem of trash in Chinatown. A lot of times a trash barrel can actually cause a problem. Why? because people will illegally dump in it. Or it could violate a law for wheelchair access. Or a business that pays to have trash collected can actually look messier because other people will dump their trash there. And the buildings are so small, that they may not have space for enough barrels, or perhaps the land owner does not actually live in Chinatown. So they may be neglecting the property. Not purposefully. But I mean, my house can start to look pretty untidy because I don't spend every minute telling my kids to put their toys away. Now think of a building full of tenants who are adults. And you own the building but you live out in the suburbs. You have your own life and another job. Are you thinking about when the trash is taken out? Probably not. So you need to have someone who lives there think about it. You pay them to think about it or give them a break on rent or whatever. But are you sure they do their job? Why can't you just do what you've always done. Maybe your parents owned the building before you and you just figured somehow the trash sorted out itself. Why would you think about it if it has never been an issue for you? And once owning said property becomes to be too much of a hassle, and you have developers offering you millions all the time.... why not just sell and retire?

Maybe I should interview more landowners in Chinatown. But who would want to talk about trash?

I will sweep the street though.

There were some things that came up in the meeting that were easy. For instance, if you see a trash can in Chinatown that is overflowing, you can use call 311 or download the App at http://www.cityofboston.gov/311/

I don't have that kind of phone so I would have to Call 311. Apparently I am also supposed to do this when I find Heroin needles. But honestly I just hope I don't find any because in the end how fast are they going to come? What do I do with the needle in the meantime? I didn't sweep on Veteran's Day so we'll find out next week. But again, I just hope I don't find anything.