Posted by Kung Fu Dad on November 29, 2015
Today from 9-5 is the election for the Chinatown Neighborhood Council at 61 Harrison Avenue. 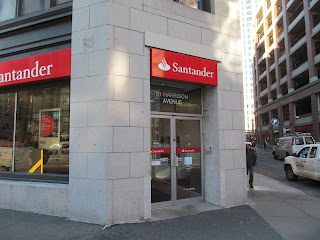 "Are there write-ins?" I asked Felix Lui, who I know through playing Chinese dulcimer and is running unopposed. "I was going to vote for myself."
"Sure you can try."
"There's a sample Ballot." said Pamela Lee who is number four on the ballot. 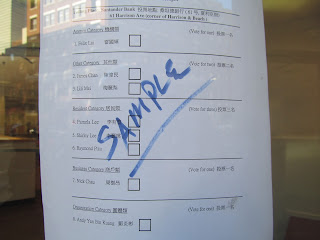 I voted for both of them in their categories because I know Felix and even though I don't know Pamela, she was standing right there. I wrote myself in for two categories. "Other" and "Organization." I believe I should qualify for organization through my work with Woo Ching White Crane and the Kung Fu Federation. 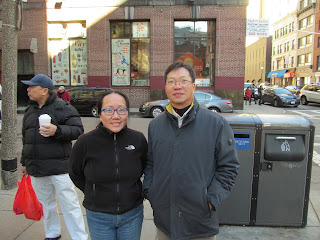 Here is a picture of Pamela and Felix. They told me I could interview them later so I will get their entire story in later posts.

So what does the CNC do anyway?

Felix answered, "Mostly it is a way for the community to have a line to the city.  (The issues are) development, liquor licenses, and some of these clubs opening down here are kind of crazy.... the meetings are every second Monday of the month at the CCBA (that's the same building as the Library and Woo Ching White Crane on 90 Tyler Street) at 6pm."

It's open to the public?

"Yeah you can come." Felix said.

What about the CCBA election? Do you know anything about that?

Holy Crap that had snuck up on me. The CCBA election has always seemed to be more important somehow in my little Chinatown world. Not everyone can vote, only the businesses, family organizations and non-profits that belong to it. For instance the Wang YMCA has a vote on it. But I have to really find out more details.

Of the other categories of people where I couldn't vote I ended up voting for Nick Chau, who ran unopposed. I might know him if I saw him, but actually I just felt like ticking off the box for fun.  Some say that this election, and even elections in general are an exercise in futility. I like to think of them as a ritual and a way to organize. For instance, I see a lot of people post stuff on Facebook about protesting or boycotting, or taking up arms etc. Election are not just about choosing a leader or a council or whatever. They are like a show of force. A protest that is 100% sanctioned by society and is a way to show you are organized. For instance, if a group of people can't even turn out to vote, it doesn't really matter how many legal or illegal guns they have at home. They will unable to organize into any sort of militia. However if a group of people who regularly turn out and are involved.. they already have leaders and organizations and a means to rise up. So you have to take that group seriously.

White Americans may surprised to know that elections are actually very important to Chinese Culture. The underground rebels groups had them even in the Qing Dynasty. And it is this type of "power to the people" that is organized and quiet and functions within society that Chinese people show their force. (Yes I'm generalizing but let me use a story that is in a lot of older Chinese men's minds.)

When the British (or maybe some other foreign group I forget) attacked Guangzhou the Qing army made a terrible show of it and actually just dropped their weapons and ran. It was the regular people who ended up fighting back and repulsing them. Some government people asked why this was possible. The response was that the people practiced Kung Fu and that's why they were organized. (They were also organized as the Triads but at that time Kung Fu and Triads were probably just one in the same whereas there is some distinction now. Triads were the ones that held elections etc.) At one point Kung Fu had sort of been illegal under the Qing government, or any type of gathering for that matter. Then it was kind of just legal, but after this incident the government actually promoted and encouraged Kung Fu. Even now there seems to be this patriotic thing about Kung Fu in regards to Ethnic Chinese Pride. Kind of like Sports for Americans. The American Flag is very prominent at Baseball and Football games. (And back in the day the Confederate Flag was very prominent in southern Football games. Look at some old footage.) The Civil Rights movement was largely about voting rights. And even when Blacks couldn't vote, it was showing up en mass to protest peacefully that brought change.

90% of Kung Fu (or taking up arms) is just showing up regularly.... and that's what voting is. Just showing up and checking a box.

And an election is a perfectly safe way to show that your group of people, are organized.  Plus you can get baos or noodles afterwards.

Now for a modern story.

A Taiwanese friend of mine, a woman, flew back to Taiwan to vote in the election because she didn't like the opposition leader or something. Now she didn't fly back just to vote.... she had family to visit etc. But she did make sure voting was part of her visit.

All this stuff went through my head on my trip back to JP.

Any Asian in Massachusetts can vote in this Chinatown Neighborhood council election. And any Chinatown resident of any race. I voted for myself in the "Other" and "organization" category. I hope everyone will go vote (and buy something in Chinatown afterwards) and consider writing me in on the categories that I qualify for. Maybe I'll even win. If not... I probably will still behave as if I did.

After this election we get to talk about the CCBA election, which is even more fun in some ways.
Share and give me ideas in the comments.