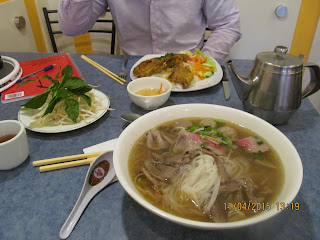 Wow this Pho looks good. I just got number 55 on the menu. Whatever that was. It looked like whatever basic Pho. I guess if I went out and ate Vietnamese food everyday I would peruse the menu and choose different things. But how often do I eat Pho? not that often.

Actually my in laws from New Jersey were very impressed  by the Vietnamese food in Boston. Usually they complain about everything Chinese. "Not as good as New York Chinatown. Not as Good."
You will be hard pressed to find a New Yorker say something is better in Boston. But Vietnamese food is an area (for now) where Bostonians can actually have some pride.
This particular bowl of Pho was excellent. I drank the soup and didn't feel I was being foolish in doing so. My fired had chicken on rice. We were talking about other stuff. (I have to work on my "#food blogging" I will admit it does not come to me naturally.)
But if you work near Chinatown, it is really great to be able to walk around and have so many choices of awesome food. It's also pretty inexpensive. Now, I've always been cheap and had tried to fit in a work out when I worked a 9-5. I also tended to go for the filling rice plates in my 6 hour Kung Fu training  a day, prekids life. But man it was really something, a privilege even, to do the whole Chinatown lunch thing.
I mean, we don't want to lose this right?