Posted by Kung Fu Dad on November 18, 2015
"I was born in New York and grew up in California for the most part. I wasn't in a Chinese Community. In fact, I remember getting lost at the Supermarket once and this woman said to me, 'There's you Daddy.'" Lydia laughed, "and I thought, 'How did she know that was my Daddy?' It wasn't until much later that I realized, 'Oh because we were the only Chinese family around.'" 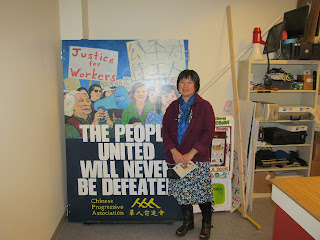 How did you get involved in Activism?

"Well I started in highschool. I was involved in a lot of anti-war protests. This was the 1970's. And I was working with the Black Panthers. Pasadena, had started busing the year after Boston did and we organized students to fight the school board. We would organize walk outs against standardized tests, go to all the school board meetings, and there were a lot of police issues. For instance there was operation sweep where anyone looking suspicious could be taken in and finger printed. And then I continued in college. But at first I didn't want to go to college. I wanted to organize and fight and join the working class."

"Well my father was a Professor and my mother  was a biochemist. My mother always told me we were higher up than the working class. But my parents separated when I was eight... so technically, I was raised in a single parent household. But at that time I thought of it as joining the working class because I didn't consider myself part of it."

"In my organizing and activism everyone I worked with was black or white. And I began to think, 'What about the Asian American movement?' My father taught at San Francisco State, so I moved  there and began Asian American studies. I felt a bond I didn't expect. I volunteered in the San Francisco Chinese Progressive Association. We organized against the evictions from I Hotel (international Hotel which was a single room occupancy hotels that housed a lot of elderly Chinese. In the late 70's I moved to New York City and I moved to Boston in 1981 with a friend and finished college at UMASS Boston. I volunteered at the Sampan and at the CPA since 1981 and the Quincy School Community Council, which is now called BCNC."

Our conversation continued and in the next post I will talk about Lydia's work in Boston and also how the Fung Wah, Sunshine Travel, Grey Hound and Peter Pan and all that Boston to New York cheap bus stuff may inadvertently have it's beginnings with CPA bus trips to New York!

If anyone wants to share their perspective of Chinatown or a story or pictures. Please let me know. And let me now what you think about my posts or what's going on in Chinatown in the comments. Perspectives about Chinatown, from Chinatown are important. so please share my post and share your stories.