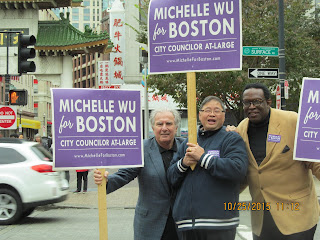 I met Howard Passman walking through Chinatown (he is to the left of Hung Goon, the current CCBA President. There is an election coming up in December and I will be sure to cover that for the blog.) But anyway, Howard seemed very interested in talking (which is not usually the case for everyone in the Chinese Community) so I thought, sure, if what is covered in the interview doesn't relate much to Chinatown, then I can always put it in my other blog Kung Fu Dad.

But Chinatown is not an island.

What is you background anyway?

"I'm a Sicilian Jew so I'll either get you with a gun or a lawyer. You ever hear that one?" he joked.  Howard had served in the Military, been an honorary Black Panther, and had been part of anti-war protests after serving. He had a lot to say  about a whole host of subjects.

It was pretty cold outside so we went to look for a building where we could sit down and talk outside of the wind. Howard happens to be a Mason. So we went into this building. 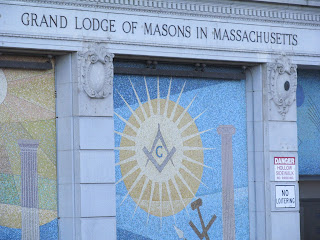 A funny story about Masons and the Chinese Freemasons (A.K.A Hung Mun.)  This Link to a Columbia Yukon Chapter has some history. Although there are Chinese Freemasons who are also Masons. The two organizations are unrelated. I've heard of some White Freemasons trying to go up to Hung Mun and being met with blank stares. But apparently Hung Mun started using the Freemason symbols a long time ago on ships. I only read that somewhere though I don't really know. I should probably do a story about them because the Boston Chinese Freemasons are an integral part of Boston's Chinatown and I'm confident that in 50 years, even if everything else turns into high rise condos, that the Hung Mun's building will still be there.

So what brought you into Chinatown to campaign for Michelle Wu?

"Not enough people appreciate the contributions that Chinatown offers the city, And Michelle.. I met her through other things I do with small businesses and things like that... but Michelle and folks like her can educate the other politicians to make them see how important the Chinatown Community is to Boston."

"Education is the Key."

"Tiger mom.. is that the term? Well I think the Chinese borrowed it from the Jewish mom. I don't want to get into names, but in my family there was a nephew and his favorite Uncle had died. But his mother told him that nobody was to say anything. His sister called and asked how this favorite Uncle was doing. 'Oh yeah he's fine. He's busy now.' Meanwhile we're all sitting Shivas (the Jewish ritual of mourning for seven days after a death.) but the sister wasn't told because she would then tell the brother and he wouldn't be in the right state of mind for taking exams. I mean is that a Tiger Mom or what?"

"I mean Academically you guys in Chinatown are doing fairly well. But I have an expression. 'Two generations to forget and 20 years to repeat.' America is forgetting it's roots." Howard listed all the old neighborhoods in Boston and how changes and shifts because of highways and developers and other forces moved things around.
"Chinatown could be that last centerpiece of how Boston used to be."

"And sure maybe things should be more modernized to try and bring more people in to come and enjoy the culture and the restaurants."

(To be fair I have seen restaurants shift and change and become more hip. So this is happening. But is it happening as a well planned out community effort? I think it is more that certain business owners are taking the lead and some community organizers have ideas. But the way it is all coming together is not as fast as the neighborhood is gentrifying. Is there room for improvement? Sure. But it is coming together organically in a way. It's just not clear to someone watching whether Chinatown is improving, or falling apart.)

Chinatown is the Key to make Boston Better?

"The Chinese bring a sense of community and a focus on academics that could actually somehow improve the Boston School systems and maybe even make thing sbetter for other ethnic groups somehow.... you look shocked." Howard noted.

Well I had never thought about Chinatown in this way. I had thought, yeah we provide food and cheap childcare where your kids can learn Mandarin. But I hadn't thought of the Chinese Community as being a catalyst for bringing up a City or a school system. But when I thought about it. There is some truth to this statement. Is there room for improvement in selling this point and also maybe making it more true? Of course. But it will be something I have to look into in the future. 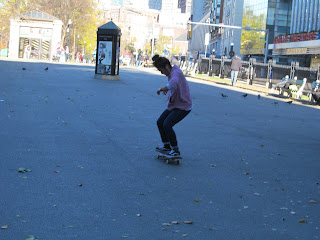 (Boylston Street T Station near Emerson. I took a picture of this skateboarder because I had never seen a female Skateboarder before.. let alone an Asian Female Skateboarder.... and right near where Gund Kwok, the all female Asian lion dance troupe,  practices. I guess I should do a piece on them too because they might not always be located on Boylston.) 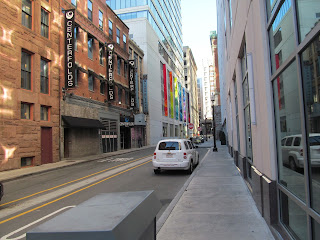 (This is what is left of the Combat Zone. So instead of Naked Eye, there is Centerfolds. The Glass Slipper is right next to it. But it doesn't look seedy on the outside. Even ten years ago this alley still looked sketchy. Now it is clean and crisp. Even the pavement is well maintained.)

"How many people live in Chinatown?"

I talked about how I had seen the number 5,000 thrown around. But that was just near Tufts. After all across the street one way from where we were talking was the Boston Common. The other way was where Gund Kwok Lion Dance Troupe Practices. 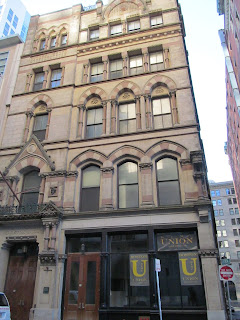 As is this building, which is supposed to be developed to house low income residents in the Chinatown area 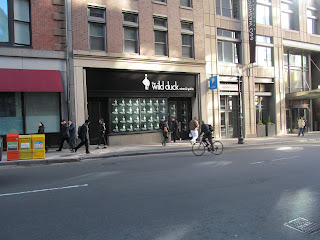 And this is part of where the RMV was. It's not a Chinese restaurant. But some place fancy. There is a Gallery showing the girly dancing shows of the 1930's and of course we are where the Combat Zone was. I talked about growing up in the Castle Square Projects which is technically the South End. But those projects were built to house displaced Chinese and Syrians after the highway cut right through one of the On Leong buildings and a ton of houses. Is that Chinatown or not?

I said that I guess it depends on how you draw the lines.

"How you draw the lines? What are we in the 19th Century? What does that mean drawing the lines?" Howard paused and looked at me. "Segregation right? We just got out of that. And I wish there weren't any lines to be drawn."