Posted by Kung Fu Dad on November 13, 2015
"I was born in Shanghai," began Huiming Guo as I started the interview, and began quietly rattling off his life history like a laundry list with the same tone that I would talk about what I did with the kids after school.
"I went through the Cultural Revolution when I was in elementary school and then later I worked in a shipyard for 6 or 7 years. Then in 1977  when things started to be normal again and I was lucky enough to go to College. Actually at that time only 4% of people went to College. Then I went to Shanghai Medical University for 5 years and from there to Shanghai Wa Shan Hospital, a very big teaching hospital."

Is that the same Wa Shan as in Wa Shan Pai, like in the Kung Fu novels.
He laughed. Hey what can I say, all I really know about China is somehow related to Kung Fu stories. But Yes it's the same Wa Shan. 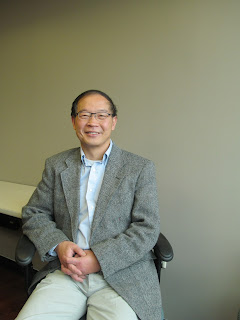 "In 1986 I came to the States to get my PhD in biophysics. I did my post doc at Tufts Medical Center in 1993. I lived mostly in the suburbs, like Brookline, Brighton, Salem, Swampscott, but we are trying to move back into Boston and so that is why I am involved in Chinatown."
I met Huiming Guo at the AACA Clean Up Chinatown Committee.

Have you seen Changes in Chinatown since you've been here?

"I have 2 daughters who have graduated from College. I was first in Chinatown in 1993. I have seen a alot of change from that time. I before the Combat Zone.. wow! My daughter was at the South Cove, bright Horizons day care for 3 years. I was scared to bring my daughter to Tufts. Now you feel quite safe.  But before walking around there in the early 90's you would feel quite unsafe, quite dangerous actually."

What are you plans for the future?

"I try to do new things for my life. For instance with SCORE. I want to help people to start their own business. A lot of people may have a good life in China but they come to the U.S. for their kids.  Their field may be in Education, Medicine, Biotech, but they basically if they don't want to do restaurant work they must start their own business. But they don't know how."

"For instance something simple like dealing with the Small Business Administration. Culturally, a lot of Chinese will hear that name and be scared, because the Chinese Government is not friendly. So they will see the name 'administration' and think 'woah, I don't want to talk to them, or be afraid.' but actually the Small Business administration is very friendly. They will help you and support you instead of tear you down."

"Or some common sense things, I was at an MIT Chinese information and networking session. Say you have discovered a new drug. Maybe you think should I do Venture Capital or something. But no, first you need to get a patent."

Did you discover a new drug?

"No, no. Actually before I had discovered a protein that was important in Cancer research. But when I look back on my work for my PhD... it was worthless. because back then we didn't know anything. Now we know so much about genes, about everything. It's so different. But a lot of people are discovering some very exciting things. But they might not know some basic common sense things about business. So that's why I am very excited about working with SCORE in the Chinese community.