Posted by Kung Fu Dad on November 22, 2015
Xinh Xing. It was one of my favorite restaurants in Chinatown. When it closed. (Yep it's definitely gone now.) It was a symbol of something. The chatter started on Facebook on Twitter. Then Maxim Coffee house and Chinatown McDonald's. But the thing is, I don't know, I didn't feel like Maxim Coffe House's baos were that good. And now a hot pot place is opening there....great. But Xinh was a good restaurant.. a great restaurant. In 2008 this restaurant was called th #1 Vietnames Restaurant in Boston. Number one. Numero Uno. 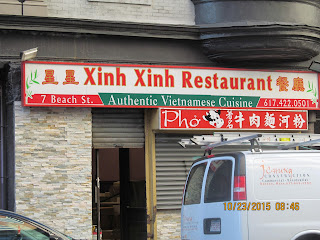 It was also #1 on Yelp. How was it? It was great, it was that hole in the wall type of place with really good food. Food that impressed you, not just filled you up. It was family owned. And as a Lion Dancer, let me tell you, on Chinese New Year, it was one of the few places..... well let's just put it this way. We would do a traditional ritual with the incense and an old woman, probably the mother of the owner, would say, "I only saw your ream do it this way, I remember when I was a little girl in Vietnam I saw the lion teams do it this way too."

So I knew there was a story here. There would be a story even if it didn't close down. But everyone wants to know. "What happened to Xinh Xinh?"

Yeah there's a story all right. More than you would imagine or more than I quite dare to write here too... unless you are already tight in the circle of Chinatown Business gossip.

But let's start with Lam, the owner who opened up the restaurant.
"I left Vietnam in 1978. We escaped by boat. It was 20 meters long and we had 198 people on board. We were drifting for 5 days in the middle of the ocean before an oil tanker rescued us. It belonged to Hong Kong, Malaysia, and Singapore. They radioed the Malaysian Navy and brought us to an island, Pulau Tengar where we lived for 11 months. No electricity, no lights...just the ocean and us.... we came to Boston on May 2nd 1978.  The fabric store across the street, that's my family's too. We've been there for 33 years."

Then suddenly the place that had occupied that space, which is now empty again, opened up. What was there before? Was it Buddha's Delight? I vaguely remember something like that. I have also heard a story about a Gallery called the Oni Gallery. But I have to look into that. In any case, the block was kind of a dump at that point. The open space was an eyesore.

"He brought over food and asked us, pleaded with us to go into that space. Because at that time we hadn't had any experience in the restaurant businesses.....if only I had known.... but anyway it doesn't matter it's over now."

Well this is just part one, or perhaps an introduction. I'm a blogger, which is not the same thing as a real journalist. But I guess at this point I really should interview some more people before continuing the story. I have to be fair right? Impartial. I have to get both sides or all sides, even if there are 15 sides to the story. Because when it comes down to it, the story of one block in Chinatown can be just as complicated thinking of all of Chinatown.

I know a lot of people who read this blog are part of the Chinatown Community and a lot of people aren't. Leads to interviews, stories, and opinions in the comments will help to tell the whole story. So I hope that people d leave a lot of comments, and that they do share this post so that people will know I am writing about it, and people can come and interview with me or perhaps write in to the blog.

I have written several books of fiction. Often, fiction holds more truth than true stories. Why? Because when the people are made up and the places are made up... then you don't have top hold back. Hell you aren't even held back by reality. It's all about the story and whether it's interesting. But if you actually have to live in the world you are writing about, you are restricted a little aren't you?