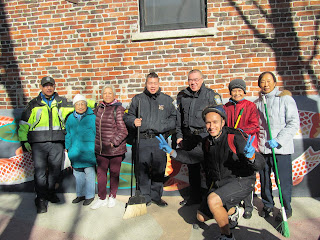 So this week a ton of people showed up to the street sweeping exercise. The park is way cleaner, not so much because we are cleaning it, but because the AACA brought attention to this park. Looking at it now you wouldn't know how nasty it was when I first started playing this little game. But it's clean because the local police, who live nearby are checking it every morning. Parks and rec are cleaning it more regularly. And so our street sweeping is more normal. 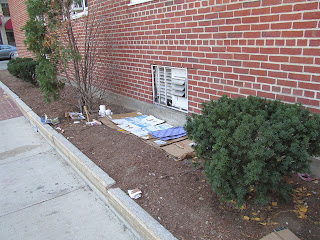 I think the guy sleeping in the park moved across the street. A lot of people cringe when I tell them I dumped this guys stuff. But click the link above (game) to my previous post and read that before judging me. And know that, I put his stuff beside the dumpster, not in it. So he was able to retrieve it. I tried talking to him too. Now he is at this warm spot. The truth is, I hope he gets housing. I would like to interview him. I know that maybe he is not even responsible for the shit and the needles. But I said I was going to clean out the park and I did. And now children can play in it.

Below is an article I submitted to the Sampan. So why did I blog about it too? Well first off, they might not run it because newspaper has to abide by certain formats and constraints. On a blog, I can have all kind of profanity and crazy stuff. Just read how I submitted the article for the Sampan and you will see the difference between what I wrote above and what I wrote below.

If I want to volunteer Street Sweep where can I get equipment?


I had covered the AACA Clean up Chinatown Committee for the Boston Chinatown Blog, and ended up joining them. I decided that I didn’t understand most of the meeting but knew that I could sweep one block where my Kung Fu school was, as if that block was my home town and my broom was a weapon defending it from trash. I teamed up with Chinatown Main Street, and Rick Wong and Courtney Ho quickly devised a plan to get rid of the trash I would sweep up with Tai Tung Villages help. You can get brooms directly from Main street, but we decided to go with Tai Tung because it was closer to Tyler Street, the street I had targeted.


Where can I dump trash if I sweep the street?


You can’t just dump trash wherever you want. That is illegal dumping and is part of the problem in Chinatown. I got Tai Tung’s permission and support to use their equipment and dumpster.


Do people even care?


Tai Tung residents (many who were old teachers of mine) have come out in full force every week. And AACA has worked with the City to draw attention to this area.


Does it even make a difference?

The first week I blogged about picking up feces and heroin needles. (I’ve since learned to call 311 to have EMS come and pick those needles up.) Through AACA and Main Street’s help, in conjunction with the Boston Police, this past week was much cleaner and it took us a shorter time to sweep a larger area. The more groups and individual’s targeting one small part of Chinatown there are, the cleaner and better the Community will be. You have the power to change your community especially if you reach out to the Community organizations for support.

The stars indicate that that was it for the article. Someone mentioned that I should be trying to write stuff for the Globe or the Herald or Boston.com.. that sort of thing. I don't know why that didn't even occur to me. But that's something I have to look into. I mean why not? All they can say is no right?


Well I hope you like my blog and what I am physically doing in the Chinatown Community. You can check out my other Blog, Kung Fu Dad. for stuff I do outside of Chinatown or just my thoughts about stuff in general. I wrote several books which I sell through Amazon, and if you bought those, that helps support me and what I do.

Also share my post to share the difference I am making and it can inspire others. Then in no time we can have a clean Chinatown and a better Chinatown. If you have stories you want to share about Chinatown please let me know in the Comments below.