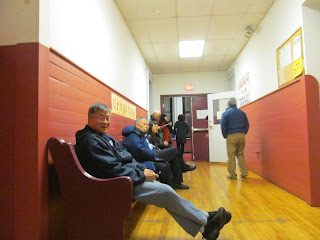 I arrived at the CCBA to find it crowded but somber. Uncle Paul did not look like he knew he was going to win. But he was hanging out inside the office. Karen was pretty sure Uncle Paul would win even though she was running against him. Basically the rumor mill told me the odds were with Paul too. Why? First of all, Chinatown is extremely conservative. The U.S. has yet to have a female President. The organizations that vote in this election are mostly run by old men. They were not ready to see a woman in the head position.
Secondly, Paul Chan is older and has therefore been in the community longer.

I'll add my own two sense to this and say that Uncle Paul seems like the kind of guy with laser like focus that can get the job done, especially when that job involves, laws, paperwork, loopholes, and pouring through stuff with language that would put me to sleep in 5 minutes. Attention to detail.. that's the expression I'm looking for.

He also knows how to play the handshaking political game. In fact, everyone was very civil and polite to each other. There wasn't any trash talk or even strong perceived animosity. No raw emotion. At the same time the energy was real low like I walked into a funeral. If Karen knew she would lose I could see why her group would be like that. But what about Uncle Paul? He looked all stressed out too. Not sure what I was expecting. Maybe more lively conversation? 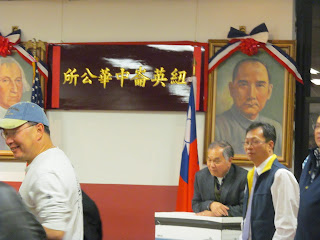 Now the great ceremony of Counting up the votes. The paintings in the back are of George Washington and Sun-Yat Sen.  This big box of envelopes was shaken up and then the envelopes with the ballots were taken out and ceremonially read. 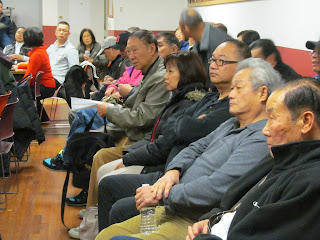 Now you could sort of feel a quiet tension settle over the room. Most people here, were here because they had some sort of interest. It kind of felt like we were gambling or something. In fact as the votes were tallied up on the board, people also tallied up votes on pieces of paper like we were playing Bingo. 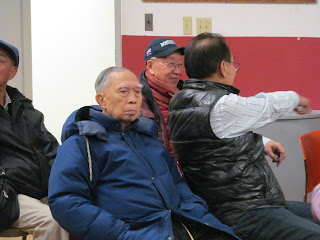 Actually before that happened Henry Yee stood up and said something in Chinese. He was representing Hoy Kew to say that his organization had been turned away from voting. How this happened was something to do with the fact that he signs it Hoy Kew Association but it is officially registered as Hoy Kew Center with the State of Massachusetts. To get negate his vote somehow his organization could be legally not recognized as legitimate and therefore not recognized in this vote. Sounds like a lot of paperwork for one vote. 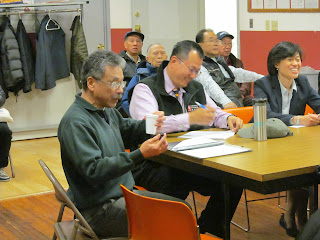 Actually Wing Kay Leunng stood up and said the same thing about his organization. So.... a lot of work for TWO votes. After this brief display of emotion everything went back to being boring as hell. There was subtle stuff going on. People were watching each others reactions to try and gauge who voted for whom. But nothing I could get a picture of in words or digital image. I just noticed tension. 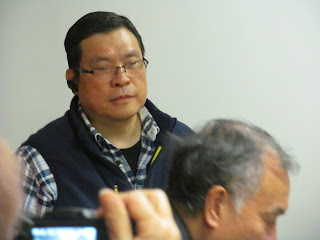 So I just started taking random ass portraits of people because my group pictures looked horrible. This is Roman Chan. He was CCBA president when I started Crime Watch. I should interview him at some point. 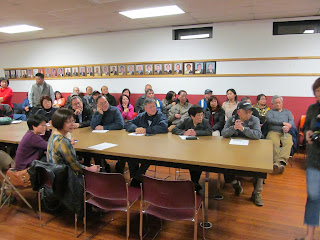 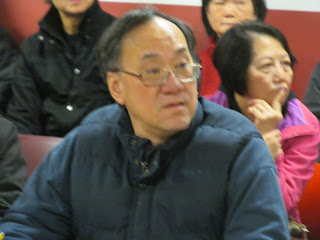 This is Michael Wong. We used to do the Crime Watch thing together. He was also CCBA President. Actually it is interesting to note that it isn't like there are really two distinct parties of Democrats and Republicans. The movement is fluid. When I started crime watch almost everyone in the room was on the same side. 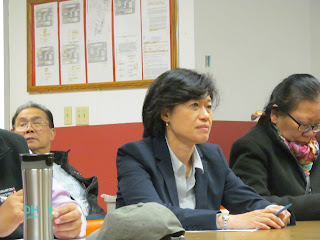 This is Karen Lee. She was running for President this time and had been Secretary of something or other in the past. She also tutored me when I was a child. 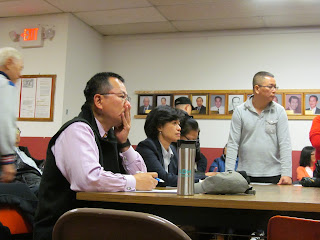 Gilbert Ho was a past CCBA President. 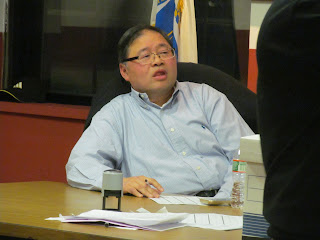 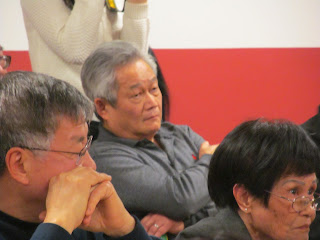 This is Paul Chan aka Uncle Paul who was running for President.  "I read your blog Adam," he told me in the hallway, "It's kind of... rambling."
It's true.
I'll work on it.
To the lower left is Rick Wong, former President and to the lower right is Tong Fung Ming, AKA Tong How Jerng. She was Principal of Kwong Kow for many years and leads a Tai Ting Senior group to do the street sweeping with me Wednesdays. She is also Karen Lee's mom.

Remember when I interviewed Han and he said that all the community meetings are basically run by the same group of old people? (older people. Older than me. I'm not saying you're old. Age is respected in Chinese culture anyway right?) Well I guess these pictures can start to show that. 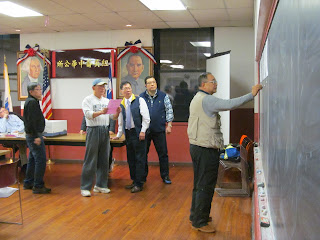 They tally out the votes on a black board. 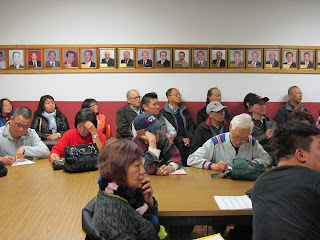 Tense Tense tense. That's actually Uncle Frank, Frank Chin in the Baseball cap. I had some other pictures of him but they all came out pretty bad. 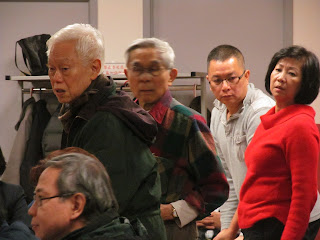 Here's another one. I really want a new camera like all the cool reporters who write for real newspapers. 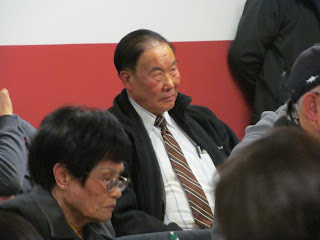 This is Leurng Teem Gong (Spelling?) I have seen him around for ten years but I've never actually talked to him. Part of that is he doesn't speak English and doesn't seem to have any interest in Kung Fu. Most of the people whom I talk to who only speak Chinese must have some sort of common interest with me. Either their kids were in the same class as my kids... something.
I guess I should interview him. He seems to be a major player in all this too. 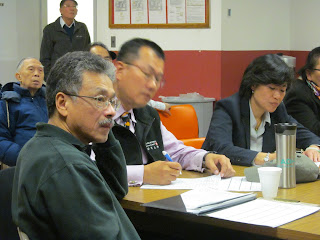 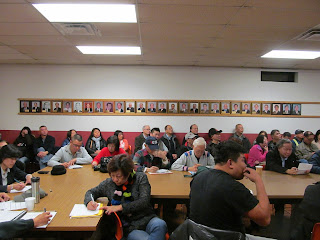 On the back wall are pictures of the old presidents. Not all the way back though. CCBA was registered in 1923 but it existed before then. I need to talk to the Chinese Historical Society to see if I can get a historical view of the organization. 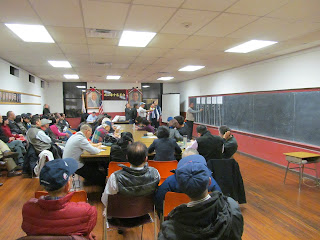 Halfway through people started clapping. I'm assuming that all of these people were for Paul Chan's side. And I assume they were clapping because he had reached the critical amount of votes. I .E. even if all of the other votes were for Karen Lee, Paul Chan would still be the next president of the CCBA would still be Paul Chan.  I.E....... 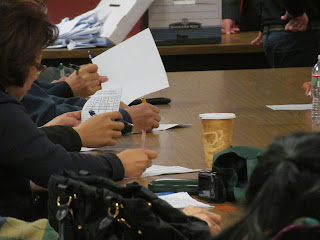 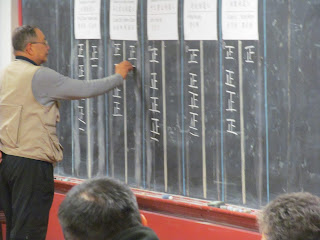 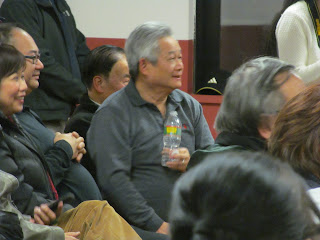 Well Uncle Paul won by more than double the votes. I guess it's been over 10 years since someone won in a landslide like that. I kind of felt bad for Karen. Again, since I know her better, I was leaning toward her. But I also knew that the odds were with Paul Chan. She also knew this and seemed to take it all in stride. 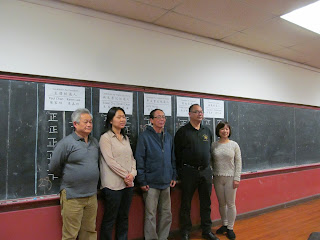 And here is the winning team.... They look ecstatic. 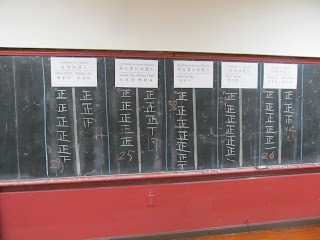 And here is the final count. Chinese people write that character, "jing" instead of the tally marks we do in the west. It also takes 5 strokes to write. They do this in Japan too. Kind of cool right? 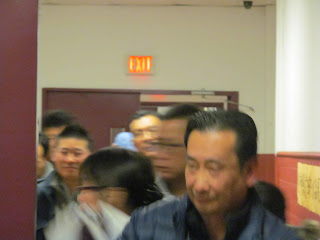 And this is everyone rushing out. Now I should try and get an interview with Uncle Paul, especially since he is the new CCBA President. "Not tonight." he said, "I'm going to go get drunk." Actually it's worth mentioning that after the whole ceremony Uncle Paul made a point of shaking hands with everyone and telling them he would still work together with them. And that's what a true statesman should do. He embraced Henry Yee and said that Hoy Kew was welcome back into the CCBA no problem... that sort of thing. I saw my my friend giving quotes to the press about how it is unusual for a candidate to win by so much.

"What did you think?" Hung Goon asked me coming out. I shrugged my shoulders. At first I thought there wasn't much to post about but I managed to throw something together. My pictures were crappy and you really need back story for it to actually be exciting.

I mean what is at stake for this election? Are there different ideologies? I sort of know but not really. I guess I need to interview the past Presidents and the current president to get a better narrative going here.

I think that this organization and this type of election is unique to Chinatowns. Other neighborhoods usually are centered around a Church or Synagogue or a local School. So I thought it would be kind of cool for people to peek into this world. What do you think? Does your community do anything like this? Share my post and comment on my blog.

bluejeans914 said…
Hi,
I stumbled upon this blog a while back and have been reading your posts since. As a Chinatown resident, I really appreciate your posts because it not only keeps the residents informed but it also gives an insight into the Chinatown life and culture for the others that don't live here. Even for us folks who live here, we are sometimes clueless to the things going around in the community.I had no idea what the CBBA was (heard it in converstions but never fully understood). Thanks for reporting and keep writing! I'm looking forward to reading more, especially your Chinatown history posts!
12/3/15, 1:02 PM

Kung Fu Dad said…
Thanks for reading and commenting! Let me know if you are interested in sharing some of your experiences.