There are a lot of mixed couples nowadays. And it's no stretch to see an Asian and a White Person meet and fall in love. But if you know more about me and realize that basically my mother didn't really speak Chinese and my Dad didn't really speak English, you would wonder how they met. Did they meet travelling around the world in Asia?

And then I would have to tell you that they met at a restaurant on Cape Cod, where they were both working... and the first common language between them, was Japanese. They had both spent some time there. Supposedly later I think they owned part of it. Or was that another restaurant. I'm pretty sure they were one and the same or at least both on Cape Cod. 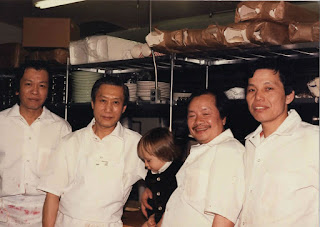 Yeah, I wasn't exactly keeping tabs on business details at the time. What am I looking at?

My dad would carry my blond headed self around Chinatown and people would say, "Are you sure that's yours?"

I guess the circle was complete when I was questioned by police when I was carrying my first born around and someone had called the police wondering the same question.

It turns out that Long Kong was a pretty famous restaurant in the Chinese Community, according to a Teet Da patient one time who came into the Kung Fu School. This is surprising because being so far away from Chinatown, the food was probably way more Americanized. 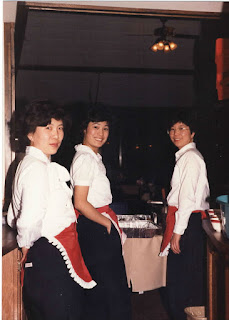 "Was the food really that good?" My Si Hing asked her.

"It wasn't famous for the food. It was famous because that was where you went when you lost a lot of money at a gambling house in Chinatown. You needed to lie low while you earned some money to pay off your debt. But where would you work as a new immigrant who didn't speak English? You couldn't work in Chinatown. Cape Cod was far enough away."

So Long Kong had this Jianghu sort of atmosphere about it. 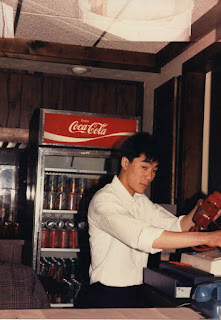 So everyone is lying low and meanwhile my mom is going around snapping pictures of everyone. Lol. After my dad died, my mom just gave up her part of the restaurant. Didn't have the time or energy for it. 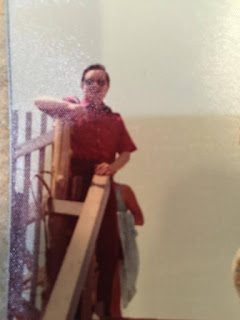 Here is one more pic of my dad before he had me taken on Cape Cod. It was sent to me by an Uncle (in the Chinese sense.) Maybe more stories about this time to come!