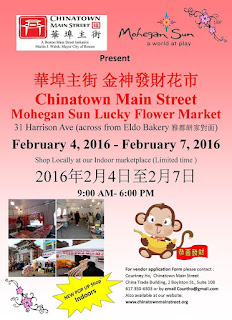 If you're wondering what a flower market is, this is basically a place where you can buy a bunch of stuff for Chinese New Year, including the traditional Chinese New Year flowers, red envelopes, that type of thing. Chinese New Year starts on Feb 8th, so this is where you buy the stuff before hand. I remember doing the lion dance for this, in fact I recognize myself as being in the Liu Bei (multi colored) head. I know it's me because I was the only one wearing those giant Snow boots. Why would I do that? Well the thing is JP was relatively snowed in. The sidewalks depend on individuals to shovel by hand. But in Chinatown, by this time the parks and rec and other big Institutions like the Hospitals  and the projects had all there stuff plowed out real nice. So where as walking down the street with snow boots in JP looked prepared, walking down the street in Snow boots in Chinatown looked downright foolish. And doing lion dance in Snow boots... well when I went to kick the oranges I was totally not used to the weight. It actually had to do with how sloppy my technique had gotten. If you lift your knee high enough, the extra weight didn't matter. But if you got lazy and didn't lift the knee... well my timing was off. Tony Yee (is in the picture on the right) and I could actually hear him saying to a friend "I don't think it's that easy to kick the orange in boots..." as I let one orange fly out of the mouth... and then slip, I kicked it but not straight on. "See he just missed it." Tony Yee said as the crowd kind of "Awwwed" in disappointment.

Just to clarify there is no rule that the Lion MUST succeed in kicking the orange. It's not bad luck to miss. The whole thing is just the lion playing with an orange, like a cat playing with yarn. That's it as far as representation and symbolism for this particular  thing goes. But I did realize that people watching REALLY want you to hit it and make the thing fly or even break apart. Plus when I did Kung Fu in those boots, it was brutal.
(Interesting note: I have been practicing in these boots almost everyday recently. But something good for practice is not necessarily good for performance)

The next week (or maybe next next week) for the Chinese New Year parade I did NOT wear the boots, and got wet feet, because I wanted to make sure I hit the oranges. But my feet were all wet.

So, after a bout a year I made sure that I really lifted that knee high enough before firing the kick. To be honest, it was really more mental than physical. You just have to remember to lift your knee a little higher than you would think you have to, so you lift as high as you can. The next Chinese New Year, I wore the boots for the big parade and kick a bunch of oranges pretty well all day.

But if I hadn't heard the audience go "Awww" and Tony Yee mention my miss... well I probably wouldn't have given any thought to the importance of hitting the orange straight on. If I hadn't got the miserable wet feet, I wouldn't have bothered about making sure I could do the kick in those heavy boots. You kind of do learn more when it doesn't go exactly your way.