I was supposed to head down there with the Gund Kwok team Thursday night.. but I fell asleep next to Noah and didn't wake back up. Here are some pics though from Nancy Funn. 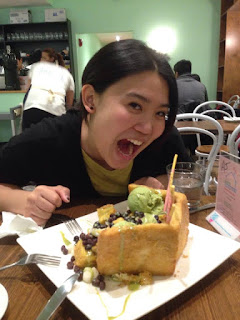 This is the Cube Toast desert or matcha ma. I have o try that one with Noah. I could probably split it with him. (Photo credit Nancy Funn) 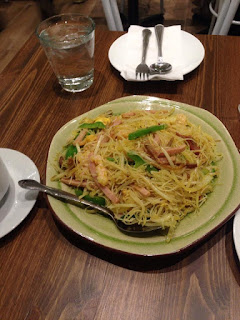 And the noodle pic is from Nancy too. "The noodles are very moist and not too spicy."

Boston.com did a nice little review. Check it out here.

The next day, I went to check out Double Chin today just to have a taste. From what I've heard and glanced from the Boston.com article it is an Asian Fusion restaurant. This may be true, but what really caught my eye was the Super Hong Kong like stuff. The stuff that was fusion, before people were saying fusion.

I had a Hong Kong milk tea in a fancy substantial British glass and a Hong Kong French Toast. Crispy on the outside and chewy on the inside with a peanut butter filling, topped with sweetened condensed milk and red beans. I haven't had a version of that type of French toast since I was in Hong Kong and honestly, Double Chin did it better. Why? Well the one I had in Hong Kong was a smaller portion, lower quality bread, and didn't have the Hong Dao red bean. Don't get me wrong. The one in Hong Kong was good. And it was my first taste of such a thing so I will always remember it. But seriously the one in Boston was better.

The atmosphere was cool. Shelves with books like Twilight and the Hunger games if you wanted to grab a book.

People in Boston who have never seen a place like this might think "Oh look at how they are mixing American stuff with Chinese stuff." But for me it really felt like Hong Kong. It was something in Boston's Chinatown, emulating something in Asia, that was emulating a classy perception of the west.
And I'm sure the big cities in China have these types of places now too.

And that just shows you what a global, connected world we've become.

I also had the Spam and Taro fries. Now that might be a new invention. I don't know. I don't really eat french fries that often any more. But I can tell you that it is nice to have these Taro and spam fries. I didn't realize how blah, regularly fries were until I realized there was another option.

I have to bring Noah back here and try some of the other dishes... or maybe I'll have to have him try the French toast again. This place is going to be a staple for Jook Sings, hipsters, and students from Asia looking for that updated atmosphere.

I noticed at the end of the Boston.com review (which I will admit I just skimmed. I noticed that it said that the restaurant is in the Theatre District. Is all of Chinatown the Theatre district?) Anyway, they are totally opening for 21 hours when the weather gets nicer. I'm thinking of all the times that friends from Chinatown went to IHOP or whatever. Well now you can have all sorts of Hong Kong French toast at 2am in Chinatown. (Or the Theatre district.. technically in both) I would be really excited to be a teenager of twenty something year old. Any friends want to hang out here at night some time?