Posted by Kung Fu Dad on February 22, 2016
Every Chinese New Year Parade has been a mythic experience for me, starting with the first one I can remember, and believing with my 4 year old mind that the lion head coming into a bakery was going to eat me. 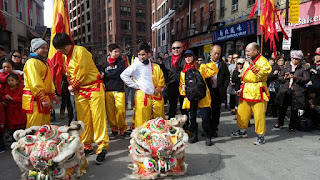 
As a lion dancer, the fatigue, I think is part of the experience, as well as the breathing in of gunpowder. Maybe during the experience, it isn't that mystical, because you are getting things done. But afterward, when you go to sleep and have strange dreams your mind processes these images differently.

Was this year special for me? I think so.

Past years I have been really considered with my team. With Face, With Yi Hei. With ritual rigidity.

I will tell you that this year I was guilty of breaking many ritual rules. What rules? Like putting the head down when I shouldn't, rules of boundaries between teams, rules of when to pick up the lettuce and orange. This year I broke these rules as if I were a child doing lion dance for the first time.

I let my guard completely down in terms of alertness and awareness of where my team was in relation to other teams.... because I had this sense that something else was happening that was of even more significance. To compare it with Western Christian mythology... I would say it isn't like the old laws were being wiped clean away, but rather that they were somehow being fulfilled.

Maybe this experience is just from my perspective, but I bet that other people had a sense of it too and part of it is because of the fact that the weather was crazy last week, and behind the scenes a lot of the teams sort of banded together to push for it to be cancelled, and then this week the weather was gorgeous. That is just coincidence. But it is human nature to take coincidence as a SIGN and find MEANING in it. 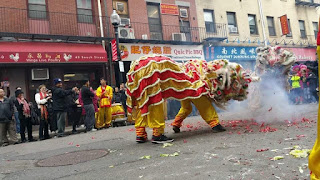 In the beginning of our dance, we were less organized than last year and wasted some time finding ourselves. I was in the head, and I was wondering, "Is it that we are short people this year? Or is it that I just don't care?" There was this feel good feeling that we weren't doing this for the Hong Baos.


And then, as the day progressed I encountered aspects of my PAST, Present and FUTURE.


Earlier on the blog I had posted some pictures my mother had taken as a baby. One picture was of a young man. I didn't recognize him because the truth is I have only a handful of memories of my father. But.. he was introduced to me and we talked. while I held a lion tail.. mid performance. This is what I mean by rules. It's not okay to get out of you lion tail during a performance. But if you are getting out of the lion tail to meet someone who knew you father and mother, maybe better than you knew them.. then it's okay. 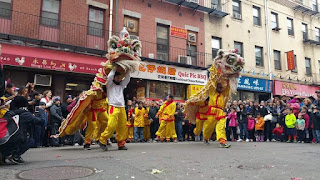 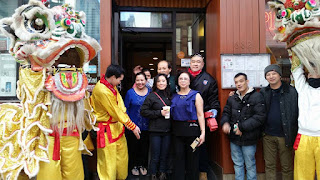 I met an old student of mine. The last time I saw him in person he was 8 years old or so. Now he is 18 or 19. I kept flashing back to him playing the baby head on Chinese New Year. Now I was his tail or filming him playing the head. And then my mind wandered to my own son who would be joining us at the end of the parade to do the baby head. I thought of Norman, the man who I met, and how maybe the last time he saw me, I was four or five or maybe even 3.

There was another instance when we met up with Wong Keung and did a little greeting. An old student of Sifu's came over and told me the rules of how to perform this Chiang. The truth is, I knew the rules already.. but I also knew, that most likely they would not be followed because the young kids were going to get their turn on the head and it was too much to try and teach them right now. Aspects of the rules would be followed. But stuff would be broken as well. But the spirit of togetherness and meeting up would over ride that. Now was THERE time, because if not now than when? I got his speech about the rules on camera, and the can watch that speech for next year.

After all the first Lion Dance, was probably done without many rules, and then more rules were developed. Over time some rules have been lost. But by passing on the art to a new generation, new customs and old customs (the good ones) can be brought back.

At the end of the day my son joined us and got plenty of lion dancing in. He ate oranges and sipped Boba. He had his Chinese AZN cultural experience. He was schooled on the rules by a parent who taught him the importance of order by age. The older lion's eat first, then the younger ones. It was hillarious. I should have gotten than on camera. But it was the passing down of a Chinese cultural norm, in a super American way.


We did lion dance at a bar and a whole crowd of Irish looking children greeted the lion heads. It felt like we were all one people celebrating a traditional holiday, and it didn't even matter where the origin was from.

They say that on St. Patrick's Day everyone in Boston is Irish.

In the future, on Chinese New Year, will everyone be Chinese?

In one of my first interviews on this blog I interviewed Hing Yee and he talked to me about this philosophy. 99 gwai 1. 99 Things becoming 1 thing. Not 99 things becoming 100 things. but 99 becoming one.

I had the sense that the whole world was moving toward that yesterday. (Maybe it was just me) But with the warm weather and the cheerful attitude of everyone, that's what it felt like. Like 99 things or groups, in other words a whole bunch of different ideas, factions, points of view... people who had been separated by time, or race, or opinion... were being pushed, nudged and corralled, Firecrackered, drummed and danced into ONE thing.