A visit to Spicy World: when your old student opens a restaurant in Chinatown


First of all Spicy World is the real Szechuan style cuisine, a real modern atmosphere. Not your Gong Gong's or even Daddy's Chinatown restaurant. It's geared toward the International Chinese student who comes to Chinatown, and really reminds you of something you might find in a hip Chinese City.
But foodies of all backgrounds are gonna love it. 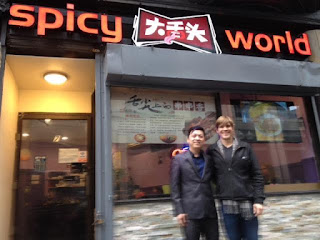 I recently saw that my friend, Fan Huang, opened up a new restaurant in Chinatown, Spicy World on 7 beach street. And when I saw that another friend, Mark Knapp used to teach him at the Josiah Quincy school,I had to put these two things together. I mean local guy starts hip new restaurant and I can interview his former teacher about how he was in the 7th grade? Golden

I new Fan Huang, mostly because when the Kung Fu school was in Tai Tung Village, Fan worked at Top Ten across the street. So when I went to rent Young and Dangerous 1-6, or some Kung Fu movies or whatever, I saw him. 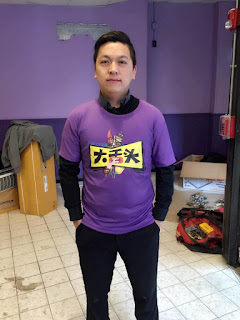 (Photo Credit: Fan Huang via Facebook)
"Fan was a really cool kid, I mean I remember he brought in this cool Kung Fu book, like old school and written in Chinese.... and he was fearless as a kid.... I mean he came here basically from the ghettos of Hong Kong to Castle Square which was still pretty tough back then....That was my first year teaching and that class had a lot of characters. It was an interesting cultural exchange between the black kids and the Chinese kids. The black kids would sort of try to punk the Chinese kids because they seemed more meek. It was good because it  made the Chinese kids tougher faster, but at the same time the black kids learned how to be calm and mellow from the Chinese kids. It was a good learning experience for both groups."

He went a little bit into how now the two groups seem to be more segregated, the reasons for this, and that it was something teachers had to figure out how to fix. I think I can fit that into a whole other post.

but back to Fan

"They tried to punk him..... once... and never again. They learned real fast not to mess with him."

What I got was that he was that fearless go-getter type that didn't take any crap from anyone. The fact that he had limited English just made him work all that much harder. He had taken some test (MCAS? Sorry guys I didn't go to public High School or middle school so I'm out of the loop) in the 8th grade and scored so high in math that  he just amazed the heck out of everyone.

I'm a little closer to age with Fan but I still sort of remembered him as a kid.

The person who I encountered at Spicy World was a fully developed shrewd businessman. Laying out his market strategy and pros and cons of opening late and just rattling off numbers. This is not his first business. He pulled out cards for his Karaoke bar in Malden 1986 KTV, on Exchange Street, and Sweet Kingdom, right next to Spicy World. And I guess Fan has another Spicy World and Sweet Kingdom in Allston. I began to feel somewhat inadequate. Like what was I doing with my life while this guy was running five businesses.

So you own the Sweet Kingdom next door too?

"Some people will want to have desert after their meal." Fan smiled.
I'd have to check that out later.

So what kind of food is at Spicy World?

Basically Fan comes in in the mornings and cooks down the broth.

You can get varying degrees of spiciness. I'm a medium sort of guy but Mark said to make it super spicy and I figured what the hell. I mean the place is called Spicy World.

But this is Szechuan spice. So it's not like your tongue will burn at all. You just swallow the spice and the heat emanates throughout your body. Fan would later say about the market for this style restaurant, "Winter is 3-6 months here." and this type of spice warms you body for sure.

But I will give you a couple of hints if you were not raised on this type of spice (like me) In fact even most Cantonese that are from the states might not be used to it. It was a type of cuisine that I had only heard of, where the "laht mei" doesn't burn you but only comes up later and warms you. And now here I was having it. I mean maybe I saw an Anthony Bourdain episode, but this is the real deal right here in Boston. I can't believe it. And I wasn't quite prepared for the spice. But Fan had a remedy for that.

"I will give  you something o help you if the spice is too much," Fan said. noticing that I felt like something was in the back of my throat, "Soy milk." and if that still doesn't completely cure it (remember Mr. Knapp ordered extra spicy) "another secret is our House Sesame Oil."
It's oil with cilantro and garlic and other incredibly good stuff. Basically everything you take out of the broth you dip into this oil first. That feeling in the back of my throat disappeared and I could now eat the same level of spiciness as Mark. Basically, these two things, the soy milk and the house sesame oil, are essential for not only your typical Gwai Lo, but also your Cantonese guy not versed in Szechuan cuisine. So make sure you order these two things.

With these two things, you will even be able to handle Marks order, a man who eats spinach drench in Sriracha sauce for breakfast.

And then how do you order?

So it's kind of like Hot Pot, but there is no bowl in the middle of the table.

You get a list of stuff on sticks that is in the fridge. Chicken, pork, veggies, lotus root, whatever. It doesn't really matter.

"I'm just going to order everything that I have no idea what it is," Mark said, except the meats, because he was trying to be vegetarian. I sort of just picked stuff at random too. It was all great. Doesn't matter. We got the Udon noodles for the bottom, and then later they bring you the the bowl of broth with the sticks of food in it. You take broth and food and put it in your own bowl and discard the sticks in a container on the side.

The secret is really the broth, which is surprisingly satisfying. You fill up on it, without feeling stuffed.

I can't really explain it, but you know you have to try it.