Posted by Kung Fu Dad on February 05, 2016
I haven't checked this community organization out yet. Plus I was directed to go to them about my idea for a Chinese-English conversation group. I popped in and talked to Hamilton (pictured below) 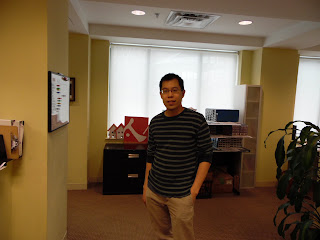 Apparently ACDC often partners with Market Developers. One Green Way was something they worked on with New Boston,  the Metropolitan (where they are located), and Oak Terrace. I still sort of can't wrap my head around how that works. I feel like I would need to sit in on one of these meetings. And then maybe I still won't get it. But basically it is the law that if a developer wants to build a condo they are often required to partner with a community organization like ACDC. Maybe someone from the organization could explain it better.

They also do outreach. There are workshops for first time home buyers and youth outreach. I'm going to try to get involved with that on some level and then blog about it. They did the films at the gate, and I performed for them a couple of times for that. But I feel like I should go to some boring meetings or something, maybe collect some stories. Maybe I just need a personal story from someone who works there.
Then maybe I'll get it.

So more to come about these guys. The organization was founded in 1987.