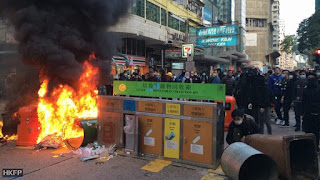 If you haven't heard about what happened here is some pretty intense video.

But what the hell is even going on and why?

I asked a friend who lives around here but grew up in Hong Kong and even worked there as an adult as well.

"The event happened in HK was nothing but a riot.  Brick throwing to police and media reporter is unjustifiable in any civil society by any measures.   I don't disagree with the fundamental messages raised by the opposition, that said their violence acts was clearly uncalled for and certainly will backfire.   After the umbrella movement, Hong Kong government failed and rejected talks with the opposition parties due to orders from the Central Communist Party leaders.   Chief Executive Leung is representing the communist party more than the people of Hong Kong.   He is the one should held responsible and accountable for this turn of event.   He should be resign due to the lack of leadership and low support rating....The government continued and systemically reject talks with opposition parties.   Some people especially the younger generation simply tired and fed up with the lack of improvements and willingness from the Hong Kong government.   They think the only way to gain traction and changes is through means of violence and disruptive social unrest"


My friend actually attended some of the peaceful protests a couple of years ago.. but in general people tend to view these riots differently.

Actually you might be surprised to know that a couple of years ago during the peaceful protests there were a few people handing out flyers to try and get support from people attending the double ten parade. Even within my own group (Woo Ching White Crane) there was a huge difference of opinion about it. Younger ABCs tended to be pro demonstrators. But actually American Chinese who have more ties to China than Hong Kong thought that kind of stuff was nonsense, crazy and just plain asking to get shot. They would always bring up Tianamen Square as an example. Basically it was, "don't fuck with Communists they don't hold back." and sort of, "just be happy you have some sort of capitalism."

I was sort of thinking, "Well at least their not bombing places. You have to let people protest otherwise they will turn to violence..." I mean I wasn't going to donate money or anything, but I feel like allowing peaceful protest or some sort of outlet among the people is important, otherwise when pushed against the wall (or when they feel like they have been) people start acting like they have lost their minds... and here we are.

I got a chance to hear the opinions of a high school teacher in Hong Kong through a friend and they were this.

Well, it's a politics issue since the rule of CY Leung, the hksar government have been ignoring the citizen opinions and blindly turning HK into another city like those in China. Some radical 'democratic parties' are formed and fight against the government. Honestly, without them, we will have peace but no democracy... The riots are rather shocking to me but they are effective in some extent to alarm the government... Unfortunately, it also lose some support from those neutral citizen who has no much attention to politics...
The responses of police are stupid as they just act like another gangster with no arrangement at all...
I myself go against the government as all drafting policies they are promoting or wanting to pass are nonsense.
We won't deny the riot of the radical parties were an organized one in Chor 1 (first day of New Year), but what else we can do to such a 'totalitarian-like' government


The first videos I saw coming out seemed to have been put out by the protesters themselves. But even in those videos I sort of thought the police looked restrained compared to what you might expect from China... of course we are still in Hong Kong. And frankly, in terms of a show of force.. well what would you think would happen in the States? In Boston we actually handled Occupy pretty well. And the Black Lives Matter protest on the highway, that was handled well too. But those protesters weren't throwing bricks. But we have had issues in the past with crowds getting out of control after baseball games. One young woman died when a police officer fired the tear gas to low and it hit her in the head.

I guess you could compare this to what happened in Ferguson... but there the press were arrested. That didn't seem to be happening in Hong Kong.

I asked a friend who used to work in law enforcement and he agreed with me but also offered these thoughts.


I believe the riot was because the gov't was shutting down street vendors. the bigger picture is if the gov't in HK is doing this then whats next.  Seems like the Chinese gov't is starting to invoke their "authority" in places where they will just piss people off.  There may be another influx of people and money to Taiwan

Money vs. Authority that's something to talk about, and might actually be the means to peace. I mean, Boston does not have an illegal night market. But if we did, how would we shut it down? With police force? Or fines. Also, if there is some sort of illegal thing happening because of a holiday, like I don't know, Firecrackers on Chinese New Year.. a cop could care less about that.. Well unless something happens. But they know that it's only for one day. My teacher friend mentioned that another issue was that the want Hong Kong to start teaching simplified Chinese in school. I mean that will piss people off, and also... who gives a shit?
But then again the textbooks in Puerto Rico are in English (I heard) even though the class is in Spanish.

I'm going to end with a quote from another friend who was born in Hong Kong and moved here when she was 9 years old.


So when I was a kid, I don't recall seeing news about people attacking police in public. There would be rally but usually peaceful rally. The younger generation is more outspoken.They express stronger dissatisfaction toward the government. My dad and bro said the those people are becoming more violent in the past two years


So why this turn to violence?

Well the voting situation was very unfair in a way. Esp to these younger generation who have eduction and can speak their minds, they wanted some sort of equality.
I can't blame them

In the states, for the most part, we know that in the end we can vote... but sometimes we get fed up too and think that are vote doesn't matter... but imagine if we couldn't even vote.

It hurts to see sometimes how they struggle because HK is such a good place.... And that's where I was born. And I don't want (anything bad to) happen to my friends and their families.