Chinese New Year and the Superbowl with Eggroll Cafe

Posted by Kung Fu Dad on February 07, 2016
As we pulled away from Eggroll Cafe in Lowell sipping our bubble teas I cracked a smile thinking of my interview with Bob Halloran. Halloran had talked about how his son was obsessed with going into Chinatown to get Bubble Tea. Guess what Bob, anyone in Mickey Ward's town can get bubble tea at Eggroll cafe now... and not only that, it's a step up from a lot of the Bubble Tea's I've had. I stopped drinking Bubble Tea after the whole Lollicup pre made powder stuff came out. But I can totally see bits of fruit in the stuff from Eggroll Cafe, so maybe I'll be chewing on tapioca while I drink my "Chinese Lattes" again. 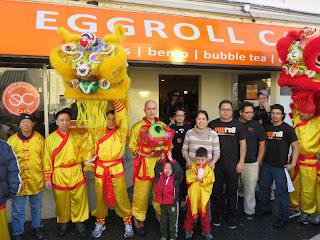 We came to 110 University road to do a Lion Dance for Chinese New Year... and left with Eggrolls and Bento boxes to eat while watching the Superbowl

As we did Lion Dance I heard cars honking loudly as they went by, "Woooo!!!!Happy New Years!!!!"
There was a rush of people coming in and out to get Super Bowl platters as well. Pretty festive day.

The Bento boxes we got were the Okinawa BBQ, Island Chicken, and Chicken Katsu. The Okinawa BBQ kind of reminded me of my favorite dish I used to get at Xinh Xinh, in Chinatown (that space is now occupied by Cuong's vegan) I liked the food at Eggroll Cafe before (the last time I was out in Lowell was a year ago) but they definitely have gotten even better. The only thing that really makes these bento boxes seem made toward American taste is that the meat is all boneless. But the flavors are all still there.

The kids loved the Bubble Teas and going to Eggroll Cafe, you sort of have to get Eggrolls right? Grace ordered the classic and the spinach and feta.

I have to tell you, when I was a kid I really loved calzones. The spinach and feta eggroll is like eating a calzone in eggroll form. It really is something.

Well we did a bunch of Lion Dances in New Hampshire and had our tuun nian fahn up there (more on that in later posts) Eggroll cafe was our last stop because the kids were lion danced out.... but Woo Ching White Crane went on to perform at another Chinese New Year event at St. Stephen's Church at Northeastern.


We got home bathed the kids and then chowed down on our Bento boxes while watching the Superbowl. Time to rest and prepare for some shoveling... and of course the big parade in Chinatown next week.