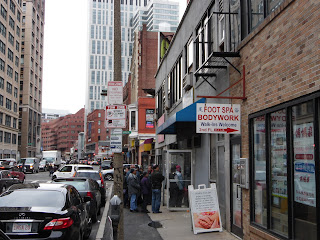 This line is at the Ming Kee Poultry where you can buy a live chicken. Well it's alive in the cage. Then they kill it for you. 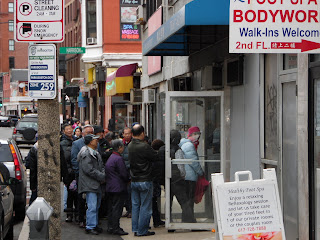 Why the line? People must be getting ready for their family's Tuen leen fahn. Or end of the year meal. It's a big deal. 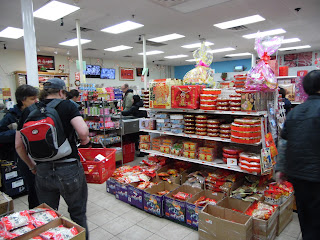 This is the Chinese New Year Candy section at Jia Ho supermarket. I overheard the conversation of the white people and I couldn't resist taking a picture. I do not think they are tourists at all. I think it is a son showing his mother around his new neighborhood (Chinatown) and all the things that he has learned and picked up. He can buy stuff look stuff up on Youtube. (My mom would actually have to ask people who didn't speak English and tried to figure it ou the hard way, or through cookbooks etc.

In other words Chinatown may be becoming gentrified... which is another word for whiter. But at the same time. The white people living in Chinatown are totally learning about the culture and absorbing it. 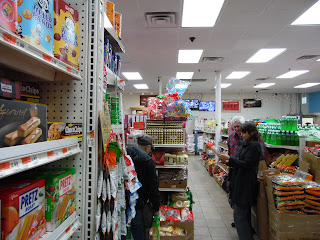 Here is another couple. "I think it's a ready to go meal" they tell each other. Actually I don't know what they were holding. I was there to get Soy milk for Grace and it was the wrong time of day to go. Usually i go in the mornings. This was noon time.

I wonder if it will become a thing (or if it already is a thing) for all Americans to go to Chinese Supermarkets for Chinese New Year, because Chinese New Year will be a mainstream American Holiday.

From Linda See Via Facebook:
With respect to Chinatown becoming gentrified - while I do not know any official statistics, my anecdotal experience as a Chinatown homeowner and landlord is that a fair amount of the home purchases in recent years are by affluent Chinese (and predominantly cash) buyers who are investing in US real estate. To your point, they in turn get rented to people of all ethnicities (not just white - in fact, I've personally never received a rental application from anyone who was white, interestingly enough) of a certain socioeconomic status, who live in the neighborhood and patronize Chinatown businesses on a daily basis and presumably more so than the folk who complain about Chinatown gentrification but avoid actually coming in to support.

(me again)
I think it would be good to look into this further.