Posted by Kung Fu Dad on February 13, 2016
I'm so happy this got postponed. I really thought someone would... well it ain't happening so it doesn't matter.

But if you are looking for something to do, Chinatown Main Street still has an event from 12-3 (indoors) at 2 Boylston. 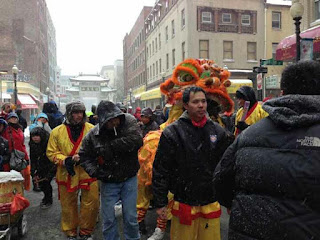 (this will not be us tomorrow.. not that it's going to snow, it's just going to be cold... but we will be indoors for our dances.)

I believe East West Bank also has something going on around the same time. And we will be stopping by there as well for a dance.

Woo Ching White Crane will be performing at St.James Church, which has it's New Year's event.

And of course the restaurants and Dim Sum are still open.

So you can still come to Chinatown this weekend. But nobody will be standing around outside in -17 degrees -35 with wind chill.

Then we are still performing for Leurng's Association Banquet at Hei La Moon (I think, it's a private event.)

Anyway, I'll still be busy tomorrow. Chinatown Main Street also has some folk dancing which I am going to try and catch.

But We WON'T be waiting around in the cold. I really hope next week is normal weahther. (Maybe even nice weather?)

I heard some buzz about people wondering if this parade was on. It's postponed till the 21st. But there is still stuff to do. Spread the word.