Posted by Kung Fu Dad on February 13, 2016
Tomorrow, Valentine's Day, is the big day in Chinatown. Because of dangerously cold temperatures the stage and the kick off, will start at 11am instead of 10am. The afternoon is supposed to be much warmer... but most teams will still start going around to the outer parts of Chinatown at 9am or so.
But Today, Wong Kerng is doing Malden and Quincy.
Watch Wong Kerng in Malden 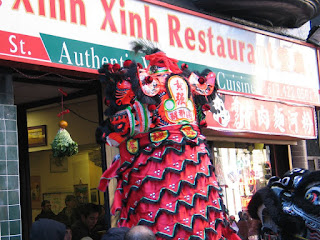 (photo credit Andre Perez)
Okay so this picture was taken in Chinatown, at Xinh Xinh, which is now Cuong's Vegan... 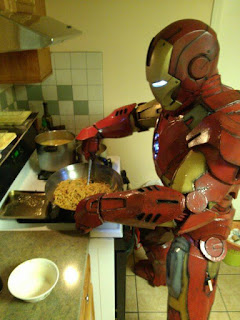 (Photo Credit Ken Wong)
And this picture has nothing to do with Lion Dance but I couldn't resist. Ken made the suit himself. He pretends it's made out of foam... but I suspect that it is an actual real suit that can fly and he just doesn't want the government to find out.

I'll try to get some real videos of Wong Keung doing Lion Dance in Quincy and Malden up here once I figure out how to do that from Facebook, or find something floating around You Tube. They are performing these two communities, today, as I am writing this.

There are a lot of interesting differences between how the "parade" is done in Malden and Quincy and inside Boston Chinatown. I think the main difference is that in Malden and Quincy, I think the teams just do it.... sort of how we did it in New Hampshire last week, except that the owners had to hire us to go all teh way to New Hampshire. Malden and Quincy have enough Chinese businesses that it is worth for the teams to go their and "pai teep" or hand out a New Year's card informing the business when they will be there.
(is it still done this way? Do you think soon we will be moving to Evites?)

I've actually never done Malden or Quincy, but I have done Dorchester a few times. Again there was no kick off. We just "pai teep" and did it. We were invited in by their local Business Association (sort of like CCBA) and it was good when the presisent went around with us, but a few times he had other things to do and we went and Pai teep without him. Some businesses were not happy to see invitations in Han language, and we sort of only wanted to do it if we were invited anyway. We haven't done it these past few years.

On the other end of the spectrum is New York. I've only done New York once and we just joined their Oak Tin association team.

In New York you actually have to apply for a permit and they can totally reject your team. Each team has like 6 detail cops and the lion heads from different teams aren't allowed anywhere near each other. Also, absolutely no fireworks. Part of the reason we went down was to do fighting forms. But at the last moment, it was decided that we shouldn't do any weapons at all because the possibility of someone getting hurt and getting sued or something like that. So there is a lot more red tape than Boston.

Boston, has detail cops and a set "parade route" and one permit from the CCBA. So some red tape.

But yeah the first year in Dorchester, we just did it and we saw police and though there might be a problem because we were breaking all sorts of laws. Our entourage of cars included one truck and then a caravan of black Mercedes Benz's which looked gangster as hell. Being in High School, I thought that was awesome.

The Police just waved and kept going despite lack of permits, all sorts of traffic violations, and firecrackers going off. I mean it's only one day, not every day.

So what are Malden and Quincy like? I guess I should interview people from Wong Keung to get the full picture.

If you're close by those communities keep your ear tuned for drum beats and firecrackers and just follow the sound. And if you take pictures or video.. post in the comments.