Posted by Kung Fu Dad on February 22, 2016
I believe this is the first time that we have a Lunar New Year event at Boston's City Hall, and it is definitely thanks to Michelle Wu, who is President of the Boston City Council. Basically if the Mayor is out of town... Michelle Wu is the Mayor. I just feel the need to reiterate this because I have  talked to people and they get the impression that Michelle Wu just represents Chinatown. Michelle Wu is President of all the people who represent  different districts in Boston. Unfortunately I didn't get a good picture of her. 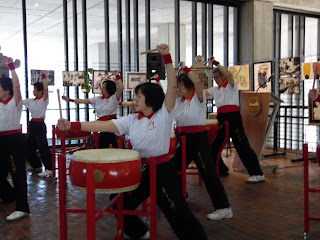 Besides my story is actually more about the performers.
This is Liu Tai, (Mrs. Liu) who belongs to the Kung Fu Dance Group. They along with the Greater Boston Chinese Golden Age Center were the performers of the day.

The reason why I want to focus on Liu Tai is because I know her from my dulcimer days. Her daughters and son and I were in the same group. "I've seen him grow up from a tiny child!" she said to a fellow dancer in Chinese.
"Don't say that! Then you give away your age!" was the reply.

I just think it is kind of cool because as Liu Tai laughed, "I'm now doing what you all were doing!" A

Wlater Apperwhite, who is the director of Constituent services was behind me and commented  that when he watched these women (and some men) dance he thought of his father, and how it is difficult for him to walk up the steps. "That sort of mobility, where she is standing on leg and getting down real low like that. That is amazing."

It made me think that this sort of thing would be good to push out into other communities. (but more on in later posts.)