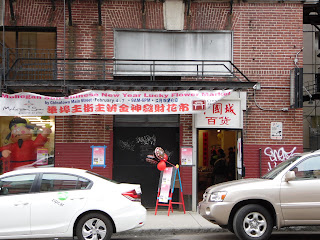 Well I went to this. Even though the flyer says it moved o this address near Herng Mun Yuen (Asian Garden) and across from Eldo's Cake house... I totally thought it was still by the gate. Because I looked at the poster, saw the old pictures (which I was in) and was like, yeah it must be there. Luckily I ran into someone who informed me of the change. Again, I've seen the poster, but i's like I can't read. I just look at the pictures... or at least I pay more attention to the pictures. I didn't even realize the business that used to be here had moved out. 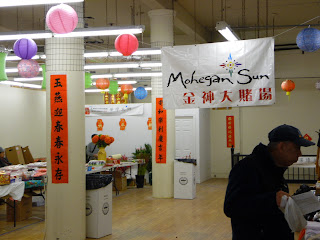 I think I came to this party a little early. The best thing to get here was the flowers, which I wasn't going to get because I had to bike back to JP. 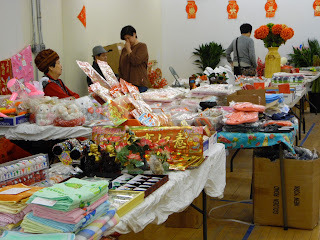 Instead I bought some stuff I didn't need out of guilt and went home to make my own Nian Hua with the kids. I think it's ironic that Christmas and Halloween decorations made in China are super cheap for some pretty hefty stuff you can reuse over and over. But the Chinese stuff made in China, tends to be.. well less cool than the Christmas decorations... and more expensive, and since it's all paper, well it's harder to reuse it, or forget not to throw it away. I bought some Fooks that fit in my little back pack for a dollar a paper. They kind of looked like they were printed in the 80's. Maybe there's more vendors that will be coming this weekend. Then again it will be snowing tonight.
I guess for this type of thing I'm a total pretender. The person whose advice I really should be seeking is an old Chinese lady. I mean those are the real holders of household traditions and Chinese New Year protocal.. inside the house right?

Update: Here's the lion heads opening up the market 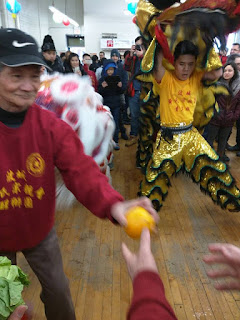 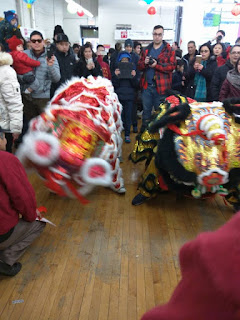 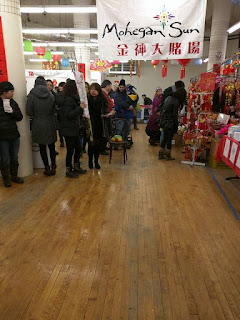