Posted by Kung Fu Dad on February 15, 2016
The Parade was cancelled but there was still stuff that happened today.

Woo Ching White Crane happened to be doing an event at St. James, and so we were available for two cultural villages that were in Chinatown.. indoors of course. It was actually kind of fun.

Here are some pictures from Chinatown Main Street's event 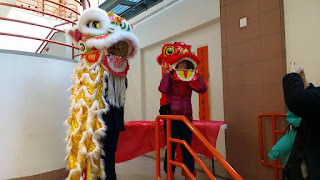 This is actually not a team. They are heads that people could try on. 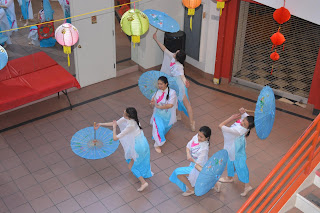 Chinese Folk Dancing. Another one of our contributors will be posting a video and will be talk more about these dances. 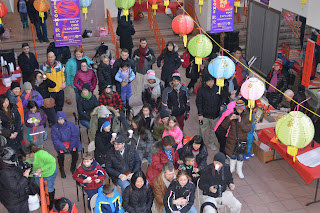 Quite a big turnout 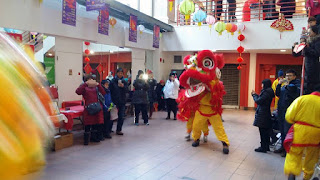 And that's me in the red head and my boots again.

Gentrification and revitalization really weighed on my mind after these events. For instance, there was a lot of great interaction between people of different races at these events. Isn't this great? what's so bad about this.
And I tried to spread the word about Chinatown blog, but interestingly I got some push back by non Chinese who said, "Okay you do the blog even though you don't live here any more." And it was great to have this great conversations with different people but once I started asking certain questions, even of my friends, there was a lot of tension that came boiling up.

For instance one woman said, "Yeah it's way better now, before we went to the theater district and I asked my friends to go over to Chinatown for some food and they said, 'no you'll die.'"

My friend responded, "No it was never that bad, I've never felt unsafe in Chinatown, we grew up here."

I wonder if part of it was more about perception.

But I feel like this interaction only happened because we were all taking pictures with a lion head, and we seemed approachable. We need more events like this so more dialogue can take place. But the hook to bring people in can't be political. It has to be something cultural like lion dance or music or whatever and the mood has to be relaxed so people feel free to let comments out that they normally wouldn't so we can get an understanding of each other.

But the mood for the day was all about celebration and happiness.

In a way, even though we didn't do the Chinatown parade. It felt like we sort of did Chinatown. Three dances in the morning and then the Leurng's association at night. A lot of those banquets usually have politicians show up to them. Tackey Chan, Donald Wong (who is also a Kung Fu Sifu and we may be getting an interview later on with him.)

But some rising stars were there like Nina Liang and Diana Hwang, and I really hope to have interviews and posts about them soon too.