Whose going to Flower Market in Chinatown?

Posted by Kung Fu Dad on February 03, 2016
I'm going to go check out the Flower Market down by the Chinatown gate tomorrow. (Thursday)
Buy my Hong Baos and what not. Maybe get some decorations to Chinese New Year up the house.
Anyone want to meet up with me?
I'm not going to be able to go on the weekend so I figure I might as well go mid week, since I noticed it was open 9-6 staring tomorrow.


After that I'm going to try and talk to some people at AsianCDC if I can.

And this weekend will be a bunch of lion dances for me and the boys, and a MOh Goon Tuen Leen Fahn in New Hampshire.

I noticed the lines for the chicken places were down the corner today probably for that Tuen Leen Fahn meal.

Then next week Feb 14 is the big parade in Chinatown!

Mainstreet has a Chinese New Year Village. It would be goo dif I could get pictures of that.. except I will have duties under a lion head. I don' think I will be going to that, but if you have small children and the firecrackers and lion heads get to be too much, cue little arts and crafts and what not at 2 Boylston are going to be a lifesaver. I think it is 12-3pm.

Plus you can also check out one of the many awesome Chinese restaurants in Chinatown. There are some really kick ass ones opening up, and there are still the good old traditional ones too. 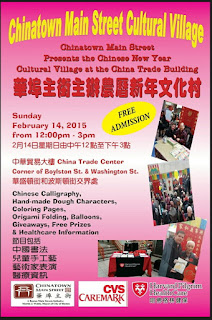 Seriously Chinatown is a kick ass neighborhood, and in many ways it is getting better and better. Yeah things are changing that might make people a bit uncomfortable. But at least for right now, there are new things to eat and try and push your borders. And for the visitor there is no doubt that it is better. The more I blog about this place, where I grew up, the more excited I am getting about it.