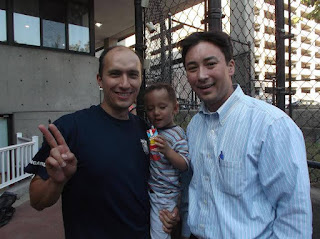 Leland Cheung is running for a different seat than Diana... which is GREAT! That means there is no conflict and I can maybe help him with his campaign too. I'll tell you one thing. Before I started doing this I didn't know anything about what districts were what... and frankly I still don't know much. Should I do more research? Yeah. But I wouldn't even be doing that research if I wasn't involved. I've learned A LOT from doing this blog because there is a difference between reading about something online or in school or talking about it.. and actually going out and DOING something. It's not so much that the DOING makes much difference externally. It's that you learn differently.


My first little project on this blog was the Street Sweeping thing. Because I had gone to an AACA meeting about cleaning up Chinatown. Did my street sweeping exercise affect the neighborhood? I would say that it did.. spiritually. But literally I did get Heroin needles out of the playground and that was something. Can they end up back their? Sure. But through sweeping I reconnected with old mentors, organizations, police, and community leaders. Through writing about it and posting it online I got back Facebook comments that taught me about 311 and by using 311 I learned more about the City where I grew up and live.

You see my point? Doing stuff is important for learning.

So Now I'm learning by helping with Diana Hwang's campaign... which will help me because I'm totally going to be involved in Leland Cheung's campaign too. I learned that door knocking and cold calling, can actually be fun, when it's just a little bit.

Will I be involved in EVERY campaign with an Asian? No I doubt it. But I've wanted to hook up with Leland for a while. Now I have an excuse.