Skip to main content
Posted by Unknown on March 16, 2016
My first ever visit to Chinatown was in 1988.  I started working in Boston, and had quickly made friends with the Chinese people in my office,  They asked me to go to lunch with them a few times, but I had always told them that I didn't like Chinese food,  It was true at the time, but little did I know that the MSG loaded food that you got at the local "Jade" place in your town wasn't eaten by most Chinese people... Or so I was told. They laughed at me when I mentioned "chicken fingers" and "egg foo yong",  "That is LOE FAHN CHUN" my friend said to me, "that is NOT real Chinese food".
Back during this time, the combat zone was in full swing, and it wasn't uncommon to see a streetwalker roaming around before noon time,  Some of them were transvestites that could walk better in high heels than I could, I learned to steer clear of the "hum sup" areas, and started to appreciate the things Chinatown had to offer.
My first adventure was going to Wai Wai on Oxford Street in Boston.  This family knew how to throw together a damned fine plate of chicken with rice, and some fantastic ginger scallion sauce that I became hooked on.  The prices have gone up since 1988, but you can still find me there or at their second location on Harrison Ave.  Thems good eatin! My second trip was to the "dai pai dong" that no longer exists in Chinatown,  It was a food court on the upper floor, and that place was like a carnival most days, I miss that place a lot.  Little did I know, it was a sign of things to come. 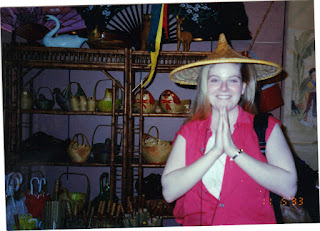 Chinatown was on the radar of some real estate developers with a serious plan.  The dai pai dong was turned into luxury condos.  The peep shows have been closed down and replaced with luxury apartments or better end restaurants. The theaters have been restored to their grandeur, and the shows are selling out.  This is all great, but with that comes the downfall of the "mom & pop" places and people that can no longer afford the rent, I am nervous for the future of Chinatown, and the loss of a culture that I've come to accept and appreciate, I know enough Chinese to get me into trouble, but in 10 years where there be any Chinatown left?