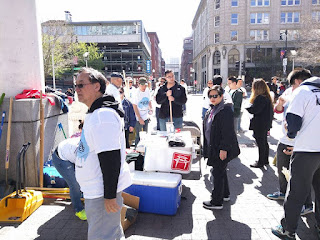 I sort of forgot about this clean up Chinatown event... but even if I had remembered I actually didn't have time. I guess I could have taken Noah down there before my Kung Fu class instead of taking him straight to JQS... but that would have been a rush and maybe I wouldn't have made it back in time.
The Knights (a local volleyball team) had a meeting so Noah didn't get his Volleyball lesson. But I ran through some drills with him. (I know nothing about Volleyball accept what I saw him learn.)

I also played basketball with an 8th grader while I was waiting for my class to start.

From the pictures it looks like a lot of cool stuff got done with this Boston Shines event. Like a new garden instead of a vacant pit? That's pretty cool.


I guess I can meet up with some of my friends who were in the pictures and ask them for any stories that may have happened.