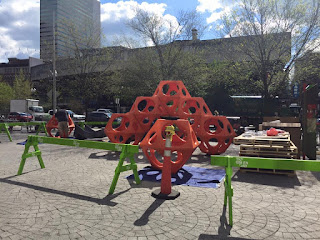 Here is what I know so far from talking to the guys working on it:

1. It should be ready for use by mid-next week. They are going to put down rubber padding around it.

2. They weren't sure if a fence is going around it. They said they personally aren't the guys who would do that, so they don't know, but they thought it was plausible that someone else has been contracted to do put one up.

3. They were not sure if it's permanent or not but they said it would be up until or through October at least.

4. It is being put up by the Greenway and some playground company whose name I have already forgotten despite having this conversation less than 2 hours ago.

That photo is from 9:30 am - there was a lot of progress done when I saw it again around noon. I will take some more photos and send to you tonight when I walk by again.

I am really excited about this as you can see!!