Posted by Kung Fu Dad on August 22, 2016
You know ever since I learned that 10 years ago there was a petition to change  Fields Corner to Little Vietnam if do look at Chau Chau City in Dorchester differently and i look at the whole Chinatown situation differently. I mean I know that technically Little Vietnam does not equal Chinatown or Quincy's Kam Man does not equal Chinatown... and some people might say.. Hey Vietnamese and Chinese are two different things. Yes but they are related right? Also a lot of people are both. Ethnically Chinese people who passed through Vietnam and therefore speak Chinese. But even if a Japan town started opening up somewhere in Boston I feel like it would make sense for the Chinatown Blog to cover that.

But also while Chinatown could disappear, Little Vietnam is still growing. It's on it's way up. True maybe ten years later you will have the High priced Condos coming up in Field's Corner for the same reasons they are going up in Chinatown. Well all the more reason to blog about it right?


But anyway this past Sunday we did our Dim Sum in Dorchester right before heading over to the kite Festival. 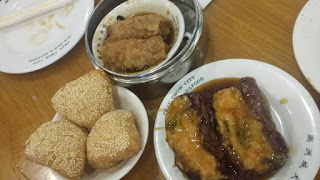 I thonk my tastes have become very ABC, Jook Sing and American in that I no longer order Chicken Feet. I just order whatever is easiest, and gooey. Shun Jook guen. on the top there, which is tofu stuff. Egg plant on the bottom right and Red Bean Triangles on the bottom left.

We wanted to order Vietnamese food too... but didn't really know how to. and Grace didn't want it that bad. The first few times we went here I spoke in Cantonese to people and there was the Vietnamese way of pronouncing Cantonese words often heard among the waitresses. But this time there were a lot of Taishanese accents too. 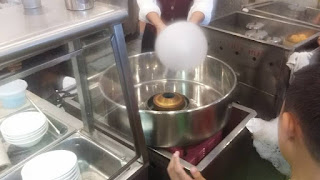 Here is something that you don't see every day at dim sum.... Cotton Candy. Although I didn't want my kids to have any and didn't allow them to, nor am I a fan f Cotton Candy, I think the idea of having it brings a very festive atmosphere to an already exciting dim sum environment. It shows that you can take an old idea like dim sum, and maybe do something new with it. This picture doesn't show the final product which were giant cotton candy cluds bigger than the kid's heads. It was pretty funny.