Posted by Kung Fu Dad on August 07, 2016
Grace really wanted to try this new restaurant and so we decided to go with our Showa friendship circle students. Grace picked them up in the car while I biked in. I arrived first on my slow bike because parking is quite difficult to find in Chinatown. The down side was that I was wet. When I came in I spoke Chinese which had a curious effect. Then I recognized one for the waters as someone I had taught Kung Fu too. We spoke in English. "Hey you know he speaks "Bak wah""

Side note, people calle Cantonese "Bak Wah." or Bak language. I don't think it is the same Bak as white. I was recently reading something historical about why it was called Bak Wah... and forgot to write it down.  That's worth a post on its own.

In any case when my family finally arrived I started telling the Showa students various stories about Chinatown. Mainly because we could see Hung Mun across the street. And Sun Yat Sen stayed thee hiding for a week, and another story I had mentioned before about FDR being a defense lawyer for a Chinatown mobster. Grace shook her head to change the subject because she said they probably didn't care about that.

But hey, getting your story out there is not about if someone "cares" about your story or not. Nobody would "care" about the mainstream history already out there that never talks about Chinatown it's just that you are first to learn about it in school and on tv and now, maybe you can find a Pokemon on top of it if you play that game.

Well Grace was in charge of ordering 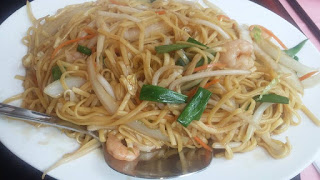 Now I'm not really a reviewer. But here is the gyst. We asked the students if they had been to Chinese restaurants in Japan and they said they had many times. They said that the taste was similar. I will guess that they are being polite because Chinese Food in Japan is supposed to be the top of the top. But they did say that the Japanese food in Boston was.... well they didn't say it was horrible but that is what they wanted to say. 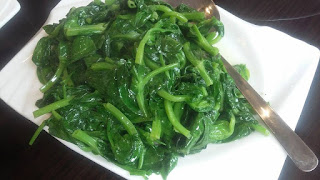 Gourmet China House is good. But I would say so are a lot of places. And it's good to try new restaurants even if you are ordering the same food. The main theme is Taiwanese food and so I ordered those scallion pancake rollups and left the rest up to Grace. I don't see a picture of the Scallion Pancake roll ups with beef.. and it might be because I grabbed it to eat right away. The above Pea pod stems (shun yung dao mieu) are always our go to vegetable because the cost of the dish vs. the cost of buying the vegetable in the supermarket comes out to the customer getting the best deal. In fact I have heard the restaurant actually loses money on this dish. 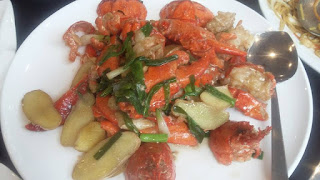 Now here is the dish that made it worth it for the Showa students. As good as the Chinese restaurants are in Japan... Lobster is a New England thing. And Chinese Style Lobster is a Boston Chinatown Thing. You could say it would be Boston Chinatown's local dish to hold up as our "you have to try it if you are visiting" dish if we were smarter about promoting ourselves. I'm allergic to lobster, but I ended up eating some anyway. I didn't have a problem because the ginger and the scallion are natural antihistamines. Another reason to put this dish on a pedestal. The Lobster was also taken from the tank alive. Yet another reason to really push this dish. I mean  honestly, we should probably be working to make this lobster replace the steamed lobster with butter dish as BOSTON's dish. I mean what else do have? Baked Beans? Clam Chowder? The meat was actually very sweet. The food might have been heavy on MSG, but this is Chinatown, not Jamaica Plain. Could a Chinese Restaurant that focuses on Organic food maybe grown in a garden out back do well? Yeah, but we're just not there yet. Maybe next year.. and people will definitely complain about it being the ultimate gentrification. 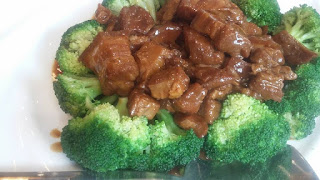 This was some kind of Taiwanese pork with Broccoli. Again. Pretty good. But looking at the table next to us, which did herbal soup and fish and other dishes that were on fire when they reached the table seems to have out ordered us. 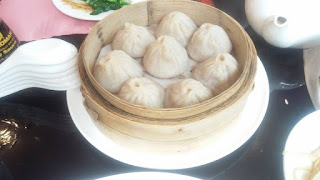 So these are the dumpling soups which everyone goes crazy over and then they are disappointed in. It used to be you could only get these at a Shanghai restaurant in Chinatown. The best I've had in recent years is a hole in the wall place in New York's Chinatown. But basically everyone is opening  "dumpling" this and Dumpling that. The first time I had this it was a novelty. People told me I wouldn't have the chopstick skills to pick it up without destroying the dumpling. Here is a curious thing Most of these dumpling things I have in Boston are easier to pick up. I.e., the outer layer is thicker... I think that also makes the dumpling not as good. I'm just saying that the dumplings might be "not as good" because they make them so even lo fahn's can pick up the dumpling with chopsticks.. otherwise you will feel like a failure.. .no matter how good the dumpling is. Okay maybe that is not it, but I think that this dish is our generations version of chicken fingers. Not to say that it isn't authentic. It is. It was invented in Shanghai in the 1930's according to Bourdain... but it has become what is hot.


and after you become a little more Asian, or hang out with Asian friends or something the list expands to

6) Pho or Vietnamese noodles. This last one is really up and coming. I mean we bought a Korean nodle package of Vietnamese Instant Pho. Once another group starts to make your ethnicity food, that's how you know the food itself is hot. That's why Sushi is at the top there. I'm not talking about quality. I'm talking about, everyone wants to try it, so everyone starts making it whether it is their specialty or not. So a restaurant might have Dumpling in it... but that doesn't mean that dumplings is there thing, it's just the right words to get you in the door. Their specialty might be something else.

My kids love dumplings. They are easy to eat.  No bones. No skill involved. I mean yeah you have to drink the soup out of a dumpling but that can be easily learned without fear of death. A bony fish can actually kill you if you're not used to it. And that even goes for Chicken too. It's why Everyone Chinese always warns me, and it's why I've seen Americans (even Chinese Americans) have some trouble. In fact my boss at the bank when I was a teller was from Hong Kong, and one day he looked a little worse for the wear over some trouble with a chicken bone down his throat.

So again, the dumplings are today's Bourdain watching more metropolitan Mainstream American version of the Chicken finger and teriyaki skewers. It IS authentic Chinese food. But the table next to us did not order that. Shoot I don't even know what they ordered. Except I think they also ordered lobster. The most authentic is often the most difficult and most expensive because you can't let the nube chef handle that one. You definitely need the Sifu for the Fish that looks like parts of it are still alive etc.

But my kids will definitely always go for dumplings over anything else.