Posted by Kung Fu Dad on August 12, 2016
You know it's funny, when I saw that this ping pong table was up, over at the Elliot Norton Park, I sort of imagined the people suing it would be old men. 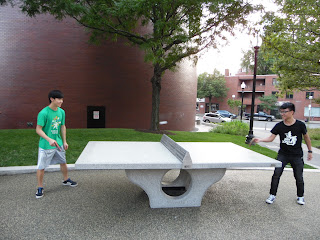 Not so, these guys were nice enough to allow me to take their picture.I'll admit that it's not a great picture. I need to get better at that. 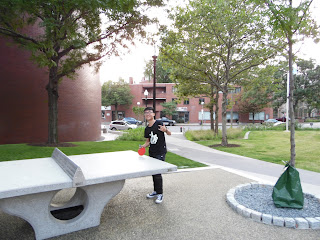 And I really should have got their names, got their story, tried to make a connection with them of some kind. I don't even know what region they are from. I started speaking in Chinese and then switched to English when i realized I couldn't assume that they necessarily spoke that language. I was headed down to GK... but still I should have asked a few more questions.


I think you could say this is some evidence of a Chinatown expansion. This park... will feel like Chinatown and will be a bridge to the Mass Pike Towers and the Castle Square Projects, which has a great deal of
Chinese living in them.

I mean it always had been right there.... but before it didn't feel like it was Chinatown. You couldn't tell. Now if you are a Tourist  walking through or using the playground you will assume it is Chinatown. Gentrification doesn't always mean shrinking. At least in the short term.