Posted by Kung Fu Dad on August 12, 2016
Remember this article in the Herald?

Today I give you this picture of the same place. 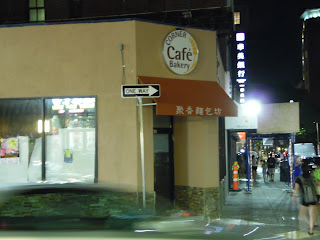 And I told you so in this article here.

It's going to be another Bakery. It will probably be a fancier place, because that is the trend, that's what sells. It will be the same owner as Top Bread from what I hear. The thing is, this was all pretty common knowledge if you asked people. One would think that is what reporters do. But what I have noticed is that when outsiders report about Chinatown, they sort of assume a culture of secrecy and mystery... which isn't always true. Either that or they just don't care.. or maybe they want to sell papers and ask a couple of people who won't know the answer and move on to the next article. I mean maybe if I was a journalist for a fancy newspaper I would do the same thing because I have so much work.

But if you look at who owns the building (Uncle Frank) and, I don't know did any sort of research whatsoever, you would know that when a bakery closed down, that another Chinese bakery was going to open in it's place. It's not the end of Chinatown. Not this particular building right now. The changing of Chinatown yes. 80cents baos moving up to dollar twenty or  yikes! 1.50 baos maybe. But how much is a scone at Starbucks? Or a muffin at Dunkin Donuts for that matter? I mean even by looking at the political signs on the outside you could have guessed wildly and at least got which family association the owner belongs to. My point is.. (to toot my own horn).. that this blog is important because even with minimal resources... at I somehow manage to get a more accurate story... for Chinatown issues at least. I'm not really criticizing newspapers... because they gave me the idea to even write about this in the first place. If they didn't take notice.. I wouldn't have. However, it might be a good idea for them to read my blog too. I mean, the truth is, even if they want to ask around.. who do they ask? Do they speak Chinese? Do they speak the right dialect? Come to think of it, I stumbled on the answers to the questions of who owned the building by chance. So I can't blame them. It's not that they aren't good at reporting. It's just that in this particular case.. I happened to be better. In since my blog is so small, I guess I'm proud of that.