A glimpse at a tourists' Chinatown

Posted by Kung Fu Dad on September 25, 2016
The other day I ate at Pho Hoa, and the pork was just on point. The fat in the pork gushed out off into my mouth in juices exploding with flavor as I tore into it. It was good food.


I wasn't in blogger mode so I didn't even take pictures.

Pho Hoa is a nice little Vietnamese restaurant on the edge of Chinatown. Everyone likes going to it from Chinese to people exploring Chinatown just getting right off the Subway or coming down from the Boston Common, but interstingly, it was the first time I had been there.


This is a restaurant that feeds the tourist and the local and  is good and has been around for a long time.

There are new restaurants in Chinatown that do the same thing. They are good, they serve locals and they serve people coming in to visit.  So I always wondered what the hell people's problems were with "new" restaurants by owners who have been here for generations, or from new owners who grew up here. How were these signs of gentrification? Or how was "gentry?" wanting to live in Chinatown a bad thing?

But I did get a glimpse of this the other night in Harvard square.

I actually had a lot of fun in Harvard square, a bit of an Asian adventure.  WIth a group of freinds we went to a Taiwanese dumpling house, followed by a South Asian poetry reading at EMW bookstore. (I had been made curiosu by Adriana Li's post about Ally Ang.) The event was called Subdrift. We then went to a Boba tea place where I ran into another friend (also Asian) and drank tea way too sweet fro a body that is no longer growing.

Later on we went yo a bar, which was not Asian in anyway, but I would imagine if there was some sort of place that was hip and affordable and similar to the Asian bars I used to frequent near BU we very well could have gone there.

First off, we didn't choose any of these places because they were Asian, we chose them because they were there and close, and what we wanted. The students were mostly Asians of all kind, east Asians and South Asians. They probably went to Harvard, or they knew people who went to Harvard, or because so many Asians go to Harvard and this has become a hang out they come down here too. We were there because Harvard Square is a cool place to hang out.

Nobody will LIVE here though for more than 4 years that I can imagine.

It felt in many ways like a campus, and the food at the Taiwanese restaurant reminded me of campus food. What I mean by that is taht it was cooked very well. All the right seasoning all the right skill to make the food. Excellent chef, my friend's liked it, everyone liked it everyone was happy.

The tea was so watered down. But it doesn't matter because most people don't even drink it. Why waste good tea on people who are just looking at it anyway? 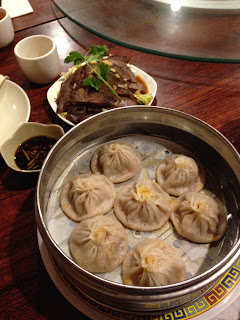 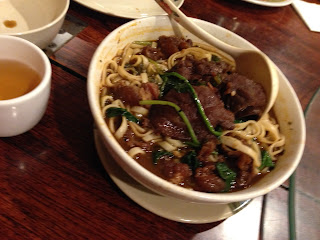 And the ingredients for the food, the meat, was missing something. It was fresh enough to serve but it didn't have flavor. I don't know why or how that works. But I had the same experience with a Food Truck by Harvard serving Banh Mi, Ramen and Riceplates all with the same meat.

Usually when people try to say that something isn't good or authentic, they say it is more Americanized. This type of language is fast becoming out of date, because Americans want stuff that is Authentic, or maybe new and call it Fusion. But either way, although this restaurant had Americans in it, it was actually built for the foreign student crowd.  And there are places in Chinatown now built for that too. These are made for Taiwanese or Mainlanders who are coming here for a few years and then going back to Asia. They way it is cooked is authentic.

But in this fantastic place in Harvard square, in terms of environment and and wall hangings, I didn't like the ingredients of the food or tea.

But you don't go to a campus to get god food. The purpose is to give homesick kids a feeling of where they come from, that is right across the street from their classes, and for Americans to get that type of feeling too. It's like more of a cultural exchange or display than a restaurant. A festival, a school fair, a display, done with business and money. It's fantastic compared to my college and high school experience.

But it's not a Chinatown Community. The future of Chinatown is something between Harvard Square and what is in Chinatown now. Chinatown is still very blue collar and restaurant worker. Dim sum, even if old Chinese men might say that they are settling for the tea, has a TEA focus. and the people looking for a taste of home are the same people who work in that same or another restaurant.


But the workers in Chinese restaurants are starting to look and talk more American too, because they are younger. To do another comparison, I met a Jook Sing who was a waitress at a highly rated dim sum place in New York's Chinatown, who did not really speak Chinese.

This isn't a sign of "erosion of culture" or "Americanization" of a place. We are in America. Are whites less European then their ancestors? Yeah in some ways of course.

I mean basically, in terms of food, my night out at Harvard Square wasn't the greatest, but I didn't go there for the food. I went there to hang out with friends.

And the funny thing is half the people eating those ingredients in that restaurant probably like to turn their noses up at Boston's Chinatown and praise New York.

New York does tend to have better ingredients because of competition. But as I have written in the past, the Vietnamese food in Boston, so far, us better. BETTER than New York's and this is from New Yorker's mouths.

Philly has some pretty fantastic food all around and most noticeably in Chinese and Vietnamese cuisine. Bigger portions, fresher ingredients.

He has to do with proximity to farms, Overhead costs and the fact that those restaurants are in the middle of neighborhoods that were traditionally blue collar German, Irish, Jewish and Polish. You didn't go to North East Philly for a touristy Chinatown in the past, and nowadays those that do, are Asian and no about it through Social Media. It's an Asian Community that sprouted up largely unbeknownst to my non Asian relatives in the area.

The food is great.


But you have to drive. You can't walk from place to place. It isn't a big hang out for college kids.

You can't hit a Taiwanese Restaurant then a South Asian poetry reading.


You can hit a family association to play Mah Jong and then go get takeout for the Family.


As it turns out, to my taste buds, I like "authentic" better.

Everyone will have their own opinion.

As for me, I am just glad that Chinatown is what it is for now.

Navigable on foot, relatively safe, full of people I know, with restaurants and supermarkets that have good food. These things are not only important for tourists, but old people living in Chinatown or taking the subway in from Roxbury.

Do I miss the old days? Well for me those days were more dangerous, though people argue about that.


Can Chinatown improve for the community itself? Yes absolutely.


Can it and will it become more touristy?

Dude look at the location. It's where you move to AFTER you graduate from Harvard. That is unless you go to New York.