A guide to Boston Public School's map of Chinatown 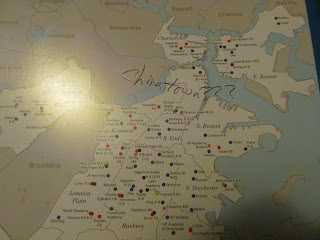 So I guess I am a bad parent for not having noticed this earlier. Actually I can't even remember last year's map. But I have taken the liberty of labeling where Chinatown should be. Although there are a bunch of other neighborhoods in that district as well. But just for the sake of argument I would like to point at that the Josiah Quincy school was actually built for Chinatown specifically after the whole eminent domain knocking down all the houses to build the highway fiasco. It was part of the deal. Here's a school and community center to make up for damage done. Now I don't know if these maps NEVER showed Chinatown or what. After all Bay Village over there too and I don't see the North End , Beacon Hill, Back Bay or Downtown on this map either. So there is an argument that it's just too much to put on the map and so the whole section is just one unlabeled thing.  Actually, there are two unlabeled things. And it appears to be Boston Proper. There aren't many schools down there either. That's interesting too isn't it? I'm sure there is an answer to this. The recent answer will probably be boring but looking at the historic perspective might be interesting.