A Night of Inspiration

Posted by Kung Fu Dad on September 30, 2016
The Chinese Historical Society honored Amy Guen tonight, also known as Auntie Amy, for her life of service to the Chinatown community. 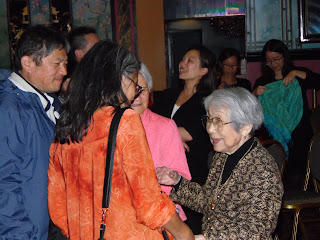 There were poetry readings by Cynthia Yee and Athena Chu (I should talk to them. Maybe there should be a poetry section to this blog)  And of Course Artist Wen-Ti Tsen's "hometown" display. 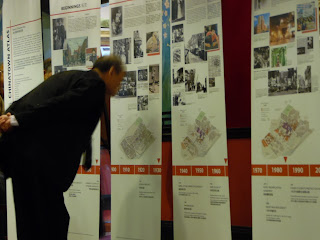 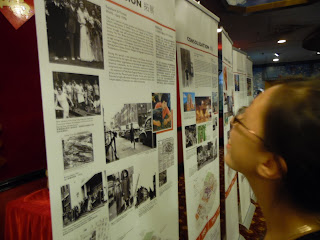 I was pretty moved and awed by Kenneth Eng's short film about Auntie Amy and about the neighborhood and what it used to be. If Kenneth's name sounds familiar, he made the movie "My Life in China" , about his father, which aired on PBS.

As it turns out, Kenneth grew up in Castle Square too. And I bumped into my friend Kim who also grew up in those projects. 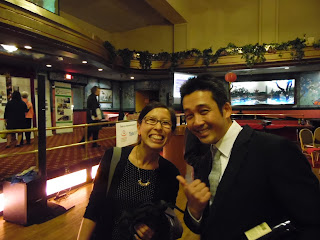 I knew a little bit about Auntie Amy's mostly because younger brother, Uncle Frank has been written about more extensively. But I guess I never did the math right because I didn't realize that they had been in China during WWII. Watching the movie about the old neighborhood and also the weight of history and stories of neighbors taking in other people's children... I just realized how petty a lot of our problems must seem to that older generation. I mean if you want to talk about STRUGGLE.

So... respect your elders, is the lesson I guess. 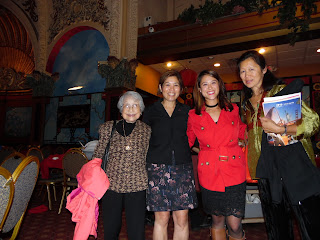 But the banquet also called upon the new generation to step up to the plate too.

Cynthia Yee at one point said that we have to tell these stories, our history, whether it is about the sweatshops or the railroad because they aren't going to learn it in school. I almost wanted to stand on my chair and yell out "Right on!" but I decided against it. I said it quietly to myself instead.

Athena Chu, who read her poem, is only in high school. There are a lot of young people with a lot to say. And young and old... we all have a lot to learn too. The banquet overwhelmed me with a saturation of stories and connections, but also reinforced that the blog is important. I mean it's not the Sampan. But its a nice thing. And it would be better if it had more voices on it too. Young voices like Athena Chu, but also the older generation, who can tell stories of their life and make sure that they are passed down.

Basically I just realized how much work I have to do.

But if Auntie Amy can dedicate so many years and still get up there and say, "As long as I am healthy and able I will keep doing this work." Then I can too.