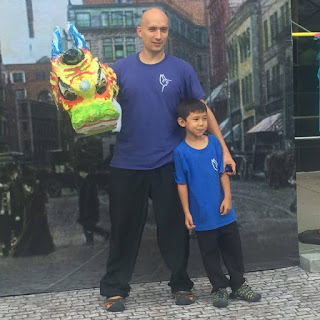 Photo Credit: Adriana Li
When I was on stage at the Lantern festival there came a time to stall so as to have something on the stage. I started telling the story of the Nian, of the lion dance, and looked into the audience. Usually I tell the story in English because that tends to be the audience, and it is assumed that Chinese people know the story. But that assumption is wrong first of all, and secondly, I have changed and adapted the story over telling and retelling it. In fact, I have written a book, Lions and Dragons and drums, which adapts the legend, to Boston Chinatown life.

Anyway I started to translate into Chinese and I saw the eyes of some of the Chinese members of the audience and they were really listening to what I was saying. Either that or they were trying to figure out why I changed the story. Anyway, what I realized was that I need to practice story telling in Chinese over and over and over. It's a skill I sort of used to have because I was always listening to stories my Sifu told me. There is more to story telling than just saying words. There is cadence and rhythm, like the playing of a drum. And Chinese has a difference cadence than English. Although I was saying words in Chinese, I wasn't respecting that cadence as much as I could, and I realized that I was just out of practice. I was out of practice listening first of all. And secondly, I hardly ever told the whole story from beginning to end in Chinese. Basically there were some white people in the audience but it would have made more sense to just leave them in the dark and talk to the 90% Chinese elderly people who were sitting there waiting patiently.

I mean, you came to Chinatown and the aim would be to be entertaining even if you didn't know what the hell I was saying and that would give you a nice little culture shock right here in the united states right?

Anyway, it's one of the things i need to practice. I guess I should hand out more by the gate and listen to old men scream at other old men, about yet other old men. While these stories have more to do with gossip, the cadence is the same and is something I have to get into the rhythm of again.