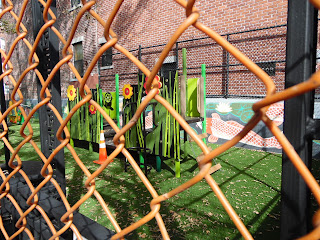 So remember I did all those clean up Tai Tung Park Zen street sweeping posts?

Well they are redoing the whole park now. I knew this, going in. In fact some people's response to the concern over the park was, "Their going to redo that whole park you know."

Looks good so far. The astro turf looks softer. But you know it's not even like the old park was THAT old. It just was nasty. But maybe now with one Greenway over there, 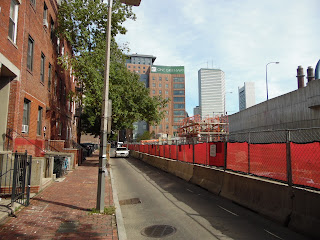 More attention is going to be paid to this block.

You know it's funny, (or maybe funny is not the right word) but when this highway was built through Chinatown knocking down a neighborhood and one of the On Leong buildings, (or was it two of them? I can check on Friday at the Chinese Historical society banquet) anyway, there is now only one, and I guess city planning back then thought this was a good idea, something necessary to do.

But now that housing has sprouted up around there again, the highway seems even more out of place, like it really should be more pedestrian friendly. There will be a lot more people (with money) walking from Chinatown over to South Station and vice versa. It occurred to me one night as I played tourist in Chinatown with a group of friends. We were walking around looking for a bar and I realized I had now become on of those people I had always seen (and somewhat despised) wandering in a way that showed you were looking for something but not really knowing where you were going. The wandering was less because there were no bars and more because there were not that many bars that did not charge a cover.