The Mask of White Privellege 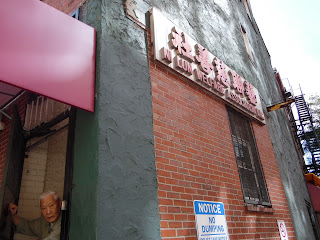 I was taking pictures around Chinatown today sort of to just practice taking pictures. Then I decided for a few reasons to take a picture of Nai Lun Welfare Associations signs. Reason 1) I'm supposed to write something about the Association at Auntie Amy's request. Reason 2) I feel like these type of traditional signs are soon going to only have a place as an exhibit at the Chinese Historical Society and reason 3) They actually used to have a big Bak Gwa sign to counter the corner from another building whose Feng Shui was attacking them. The Bak Gwa neutralizes it. Years a go I saw a Chinatown tour stop there and talk about the Bak Gwa (without knowing really why it was there specifically, only that it vaguely brought good luck through Feng Shui. It wasn't until I passed by the place with some freinds and a Feng Shui master was part of the group and he pulled out is compass that I found out EXACTLY why it was there. ....

But now it's gone.

Anyway, as I was taking a picture of the sign inside the gate (which I didn't get) the door opened and someone came out. What I should have done was talk to him and ask questions. You know since I want to know more about the organization that my father used to bring me into.

But I also knew I didn't have a lot of time. I was teaching a class in a few minutes.

So I totally pulled this random white guy thing where I pretended I didn't know what was being said about me. And what was said was, "Hmm I guess this guy is taking a picture of the sign."

So I put on the white mask and then walked down to my class and taught it. Part of the class is doing stances and I sing the Nam Yi Dong Ji Kerng song.  thought about how weird this was, that I had just pulled the white mask over my face and here I was trying to connect kids to the whole Kung Fu mythology of 200 years ago (though the lyrics were from like the 90's or something.) but it't the Wong Fei Hung theme. You know, strengthen the country and out with the Opium (doesn't matter if the actual Wong Fei Hung never fought in the opium wars or not, it's the movies that put him there and so that's what the song is about. The Black Flag militia and all that except, it;s the rated G version where Wong Fei Hung is a fantastically moral hero.

Any way, here I am singing the song and doing the stances after pretending to be the random white guy. It felt off.