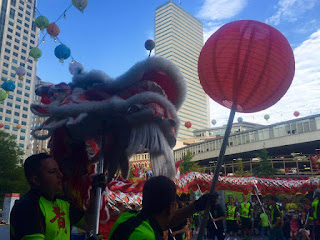 I can't wiat to go through the video I got. This finale was something special. At the end Gilbert Ho was like, "Is that how you do it!"  I mean there was the Dragon from Wong Keurng then Woo Ching White Crane  had the Lion, then (they were performing together as the Kung Fu Federation) and then there was smoke and those confetti poppers. The old ladies pushing me out of the way to get to those things was like Kung Fu techniques too. I really hope the footage can capture some of what I saw with the smoke and the floating confetti and the Chinatown Gate in the background. Actually I'm pretty worried that it won't. 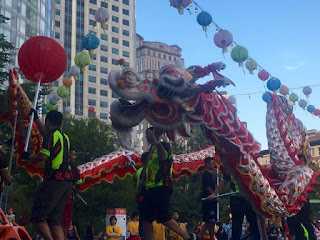 Look at the size of this thing! 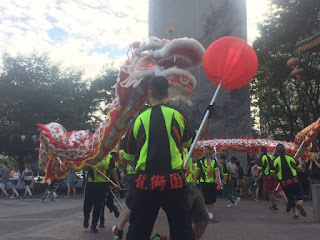 Here it is seeming to fly down from the painting of the mountains in the background. Imagine being a little kid in the audience and watching this thing fly through the air slithering by. It's Crazy!

Unknown said…
Ha ha..! I also noticed the way all of those old ladies and other parents were all scrambling to get their hands on the streamers for their children and families; amongst all the excitement and filming I was trying not to get an early one in the face!
9/10/16, 11:51 PM

Kung Fu Dad said…
I guess I should have filmed the old ladies... but it's actually not that easy to capture the stuff you know is coming, let alone unexpected stuff like that.

Unknown said…
It's best that you didn't further tangle yourself between them and their eyes on the prize! Something tells me that would not have worked out in your favor
9/11/16, 5:18 PM

Paulo Teixeira said…
Lantern Festival part 4
https://www.youtube.com/watch?v=7OGpAy2zK2o&list=PLfiUWslpPfwxtbXGwEppjSDUjU3vzBveS&index=8
This video has you in it. The audio is missing in 1 part and distorted in another part since I used the auto feature that removes copyrighted audio. if you don't do that, the video might not be playable in some devices. Anyway, I thought you'd like to see it so I'm sharing it.
9/12/16, 1:44 AM