1CAC: A Live Theater of our own 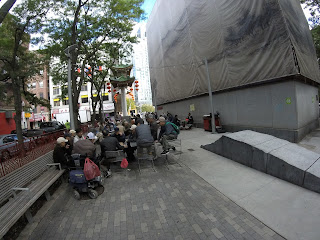 I was at the park reading Hong Kong author, Sergio Monteiro's political thriller "Other American Dreams" and suddenly the dialogue on the page made me flashback to how kids in my middle school talked. There is a difference between how television depicts people talking "street" and how the words actually flow on the page. As I listened to the the course banter... one could call "locker room talk" of the old men playing chess and started watching their game, I thought of how important it is to hear the strategies of chess praised and criticized in terms you can understand. "Ni hahng co ge Si Kei ah deem duk ah!"

The park is a theater to the tourist and a gathering place to trade cigarettes for the elderly. It's a trip back to the old world. All that's missing is some Chinese Opera.

But for the younger generation... they feel lost and maybe even disgusted by this display.

I had been thinking for some time, especially after Boston Chinatown Blog Contributor, Adriana Li, mentioned that in college she had written and directed a play of her own. That Chinatown could use it's own theater company. Whether the stage plays would take place at the CCBA or the Quincy school it didn't matter.

Other playwright musicians, like Melissa Li, have had their work at the Calderwood Pavillion. Her play was called "Surviving the Nian." Which is actually a theme that I explore myself through different eyes as a Lion/Nian Dancer.

But couldn't Chinatown use it's own theater? Something more accessible to the youth  than Chinese Opera (which i happen to like, but many Jook Sings do not)

And lo and behold... there is a Theater being built at One Greenway as we speak. A space that BCNC will be moving into (and of course they need to raise mad money to do this). More than a theater it will be an art Gallery and there will be classrooms where Bunker Hill will come into teach classes. In other words, Bunker Hill will have a campus in Chinatown. Where will this be? One Greenway. More to come on this in later posts.