1st grade: Let the Kung Fu games Begin! And may the odds be ever in your favor. 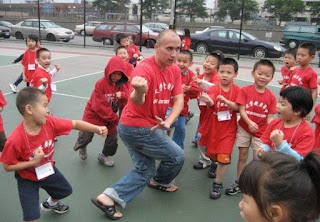 (This story is true, it is not my story and names have been changed mostly to protect me from back lash. The picture abo e has nothing to do with the story. But I have to work with what I have okay, so give me a break.)

"Before, Chinatown had three movie theaters. There was China Cinema, Star Cinema, and (I forget) but chances are they were playing a Kung Fu movie at any given time and chances are, if you grew up in Chinatown, that over the weekend, one of the thing you would do was watch a Kung Fu movie."

"Now this was back in the day, at the Josiah Quincy School, still the new building, but it was different back then because now, you can't play Cowboys and Indians, you can't even hold your hands like a gun... but back then! I mean it was awesome."

"This was in the bilingual classes, so in addition to teaching you English and math, they would also teach you Chinese. And anytime for recess, it would be hands up in Moh Dong sau and Wahhhhhhhh!!!!! I gotta tell you, we hit each other, Tiger clawed each other, and even hit each other in the balls. I mean my balls were black and blue. But I would go home and I would actually think, 'How did he hit m? Was it like that? What can I do? Oh I can block and Bam!' and I would practice that over and over and then next day at recess he would come at me and I would block and bam! and it would be his turn to curl into a ball and move to the side crawling to lick his wounds."

"Our Kung Fu was from watching the movies but there was this one kid, Ki" (obviously not his real name okay?) "and he actually studied Kung Fu, so people bowed to him. He was like big man on campus... but remember this is kind of ridiculous because we're all in first grade! But I just couldn't go with the norm and jump on the bandwagon so I didn't bow to him. Somehow, the bilingual class was so big that they split it into two classes. So instead of one 30 kid class you had two 15 kid classes or something like that. Anyway, Ki was the leader of his class, and I was in the other class. We decided we should have a leader too. It wasn't me at first. It was the hunger games and we had to fight to choose a leader. The first thing I did was beat the crap out of the biggest kid, Liang, and once I beat him, he became my Lieutenant. But it still wasn't over. There was this other kid Andy Jui, Mrs. Jui's son actually" (again not real names but me, Adam, would have a run in with Mrs. Jui.. not real name... in Chinese school much later.)

"And he wanted to be leader too. Somehow most people decided I was leader... but this one time he wanted to prove himself. We got let out for recess but it was raining that day so we just played in the common area where kids would gather for the pledge of allegiance. You know how Quincy school is, they don't really have rooms up there, more like wall dividers so anything said in one classroom loud enough can be heard by the whole floor. Anyway our class got let out and some of the kids decided that we should challenge the other bilingual class and beat up their leader, Ki."

"Everyone starts going over there and Andy Jui steps up, 'Yes! I will lead them.  I will lead you to fight Ki." (all of this is in Chinese btw) 'Okay,' I said, 'if that's what you want to do.' So Ki is in a leadership position now, maybe even proving that he is a more valuable leader than me.

"So all these kids start walking over and Ki is leading the pack and I grab my Lieutenant out of there, 'Just watch this' I said. Ki's class is still n session and he is working on some kind of worksheet and the bilingual teacher, Mr. Chan, is leaning over him helping him. When suddenly this gang of 1st graders from the other class walks right into their class while they are still in session. Andy Jui struts in, tough 1st grader and raises his arms high into the air announcing to the class, super Kung Fu gang style, 'Ngau dei lei Da ah Ki la!" "We have come to beat Ki!"

Suddenly, Ki looks up, the teacher looks up and goes "Get out of here NOW!" and the gang suddenly all runs out. It was hilarious! The memory is stuck in my mind. It was so great mostly because of the absurdity of it all.  But those were the good old days.