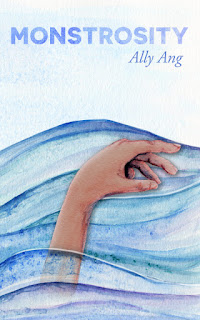 Click on this link to buy the chapbook.
A lot of the Chinatown Blog has been focused on the past. Its safer to talk about things the more distance and time we put between them. In fact I still laugh when Auntie Amy, in many ways Chinatown's Matriarch, mentioned I should write more about my father, paused, and then said, "Yes it should be long enough now." She was totally talking about statute of limitations. Unfortunately, if you wait that long, sometimes the stories are forgotten or only pieces of them are left and so Hollywood (or even the news) just makes stuff up to suit themselves and that ends up being the Asian American story.

Ally Ang is a contemporary poet and author who in a lot of ways represents the future. Now she's not from Chinatown. But I went to a couple events at EMW and the energy of the young Asians hanging around Harvard square is incredible. Willingness to share controversial poetry... but also the means, the brains the potential... you can feel in the room. We can't just let these people leave without somehow tapping into that now! In fact I think I talked to Lydia Lowe, of the CPA about this as well. That there is a ton of people who go out of Chinatown or pass through it and there is a ton of Asian Americans and also just straight Asians in Boston that are here for school or what have you and at some point they come to Chinatown to eat. Don;t just think of them as tourists. They don't want Chinatown to disappear. I mean at EMW 99% of the poems I heard were in some way related to social justice.

I wrote about how I was kind of disappointed with the Chinese Food in Harvard square, starting with the tea, but there was no lack of Asians and enthusiasm and wealth. If you want to see Chinatown's future, for better or worse, Harvard Square is it. And if you want to get ahead of the curve and participate in these changes, and make sure that there are more improvements and culture created and changed rather than lost, I think we have to be proactive about it.

Hey but is this post about Ally Ang or what?

Ally is a senior at Wellesley College and a Sociology major. She has been writing  poetry, as many teenagers do for a long time, but two years ago something clicked. Her poetry became more than just about herself. She has quite a following, part of which she credits to the support of the Wellesley Community. But to have a following, to actually make money as a poet, I mean what are the percentages of people that are able to do that?
I asked her which poets she gravitated toward. "Franny Choi, Fatimah Ashgar, Safia Elhillo, Danez Smith...When I started writing poetry I was reading more T.S. Elliot, Sylvia Plath... the more Classic stuff. But after highschool I made it a point to read more contemporary poetry and queer poets of color.. people who were generally under represented."

A good deal of the people in the room when Ally read at EMW (our Malden Correspondent Adriana Li was there.) In fact there was talk of recruiting from the masses of Asian women that showed up for a prominent Chinatown women's group. "90% of the people who showed up at EMW for my event were from Wellesley. Even people who don't know me are very supportive about showing up for other Wellsely people. It's a strong community."

I wanted to ask if she considered herself an Asian American poet or a queer poet, or how she categorized herself. But as I was saying these words I realized how stupid and ignorant I was sounding, like I might as well have been Jesse Watters asking dudes if they did Karate on the street. And this is part of the reason why we need more contributors on the blog, my ignorance of a lot of things.

"I mean I write about being Asian American. My father is an immigrant from Indonesia. My mom is an American who was travelling in Indonesia and met my Dad they started dating long distance. My Dad came to America in 1989."

Indonesia, has always had anti-Chinese incidents. My mother said when she lived there she often lived with Chinese and that the girl she shared a room with always slept in her clothes just in case. Later, in the 90's Chinatown and the Kung Fu Federation was involved in a protest that went down to Fanueil Hall and the Shoah Memorial because of a government sponsored pogrom against Han Chinese.

"I write about that. But I often write about not knowing about it because my father is too traumatized to talk about it."

I asked her what her plans for the future were.

"I'm applying to Grad school and Sociology PhD. I eventually hope to be a Sociology Professor. But I definitely want to continue writing poetry." If you would like to show your support and buy her book, again click on the link at the top of the post.

But the most exciting thing for me is.... Ally Ang agreed t get involved on the blog. So we may be hearing more from her in the future. Maybe she can bridge the gap between Chinatown and the young Asian Americans that are all around the Cities of Boston and Cambridge. 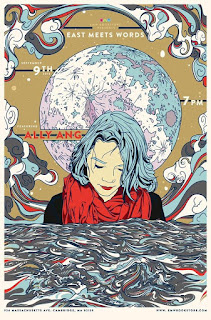 And this would be the perfect time to do it. Again, 1CAC, which will be a live theater and gallery housed in One Greenway, is totally going to be working with EMW. All that energy in Harvard Square? All those Wicked Smahht Asian Americans with dreams, goals, means and storng well connected futures... we could be having them in CHINATOWN reading poetry, in CHINATOWN going to art exhibits, in CHINTOWN getting boba tea lattes and fau yuk and gon chau ngau hau and yes Taiwanese Dumplings.

Do you feel me now?

I think it's a big deal. I mean my Dad ran gambling houses yeah and I guess that paid the bills, sort of, though from what I here... actually not at all. Maybe even the opposite. And okay we have successful Asian Americans in all sorts of lo fahn gung (white people's careers). But it's like they have to make a choice between Chinatown, and their future... and with 1CAC we can be bringing people in new blood who have the ideas and the careers already.

Ally Ang is one of those people, and a leader at that.

We are lucky to have her.