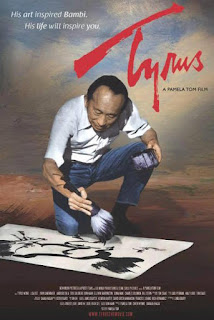 Since everyone has been talking so much about Mulan recently, and there was controversy over the live action movie first having a white savior character, and then celebration that it didn't.... and think it's important to take it back to the days of Bambi for second. Apparently, Tyrus Wong's style inspired all the animation in the film. In other words Bambi's art is Chinese American. There are Chinese brushstrokes all over that movie.

And Tyrus was more than just an animator. He painted, he built kites, and this was back in the day when this type of thing wasn't seen as possible for a Chinese American. But not only did he become an animator for Disney but the whole company moved towards his style for Bambi.

Art is one of the ins for Chinese Culture to get to the west. It can be seen in the type of exchange of porcelain and paintings between East and West centuries ago. There are German porcelain statues of Mary based on Chinese Kuan Yin's based on German Mary's.... based on Chinese Kuan Yin's... I didn't write that twice by accident. It's just there has been a lot of back and forth.

And then when porcelain was shipped to the west, people like Van Gogh became fascinated in the old throw away images that the pieces were wrapped in started to try and emulate the Chinese style of painting.

More on that next post when I talk more about 1CAC