Gearing up for Double Ten 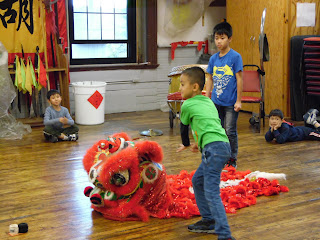 Stopped by to say hi since we will be marching in the Double Ten parade coming up this Saturday. People will gather around 9:30 at the Chinatown gate and the parade starts at 10:30. I didn't realize my friend had a class going on. Surprisingly Noah actually listened pretty well. He certain;y doesn't listen that well in my classes 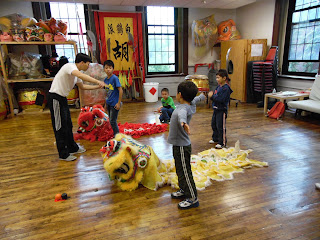 The class is Sundays at 3pm over at Woo Ching White Crane on 90 Tyler Street, the CCBA building 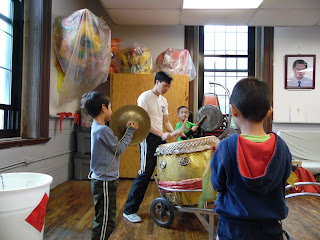 It made me realized that this school functions a lot like a Village association. I say that because there are family associations, and fraternal organizations. And this Kung Fu school is an American extension of the Chinese hometown village. That is kind of what it feels like anyway. Noah ate a bunch of clementines and then took off. I don't even really know who these other kids are. I guess will see them on Double 10 (technically being celebrated on October 8) I'll take some pictures. Noah will probably ride his bike, maybe do some lion head. Jonah? I think he'll stay home with Grace. It's weird that Grace is not as into this as me. But then her family is actually local Taiwanese, so they have no particular love for this particular flag, just the island itself as a homeland. I just think it's important that someone teaches Noah (and later Jonah) about their Taiwanese heritage. Is it weird that it's me? I guess. But hey, it was my mom that made sure I did all the Chinese stuff. I guess it's sort of a family tradition after all.

It occurred to me that if I wanted Noah to go to Chinese school on the weekends, I would prefer that it looked more like this. Some old people who don't speak English with some pens, brushes and paper. Draw stuff, tell stories, look at the newspaper. PLay some fake Mah Jong and Chinese chess. Throw some Chinese instruments in there, Kung Fu and Lion Dance. But I hate that sitting in rows crap looking at a board. I'm not saying be informal, because you still have to have some sort of structure. But let the kids move.

By the way, all the flyers nowadays say Double Tenth, like that's supposed to be an improvement grammatically over Double Ten. But nah dude. It's the tenth day of the tenth month. That's how you would use tenth. But two tens together what to call that? Double Ten dude. Maybe Double Tens, but that's whack too.

It sounds good just stick with it.

I refuse to start calling this the Double Tenth parade.

Unknown said…
Actually, when I was a kid I used to cry and beg to go to Chinese school on the weekends.

I literally thought this is what Chinese school was as well, I wanted to be immersed in more old people sitting around speaking Toisan or Cantonese to me, learn mah Jong, and listen to lion drums and stories. It wasn't until adulthood that I realized it's actually school like regular school and my mother thought she was saving me stress. Maybe I still would have liked it more than you did as a kid anyway.
10/5/16, 7:16 AM